Cal Ripken, Iron Man of the Baltimore Orioles, played in 2,632 consecutive baseball games. Stefanie Zaner, Iron Kid of Darnestown, is closing in on her 2,340th straight day of public school. 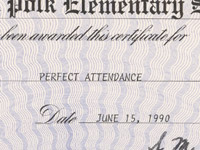 Thirteen years of perfect attendance is quite the accomplishment, although it's ultimately useless. I never got near this lofty attendance record, although I did go to school every day during the sixth grade.

Not once in 13 years was Stefanie marked absent: not for a cold, a family vacation, a college visit or a senior skip day. She once went on a freshman trip to Shanghai with the school marching band and boarded the plane with her clarinet only after securing written assurance from the principal that the trip would not count as an absence.

If you're going to pursue an accomplishment as pendantic as "showing up for school every day", you can't game the system by exempting some of your absences. You're either there, or you're not, and if you're not, then obviously you don't have perfect attendance. Kids today have it so easy -- when I was vying for perfect attendance, my teachers actively tried to make it more difficult for us by including leper-hugging as a mandated part of gym and hiding sharp rusty objects in our desks.

In other news, I ran a triathlon last year in record time, although I got written permission from the judges to skip the swimming and cycling portions, and to do the running part at a moderate (mostly walking) pace over the course of several months.

The lack of conclusive data was caused by the abrupt departure of the reporter's research assistant, who realized that she was working on a story about school attendance. This, in itself, would not be a big deal, except that she had just contributed to stories about "people who got wet during yesterday's thunderstorm" and another about how "young people like Facebook". She is currently busy removing the B.A. in English from her resum? and applying to welding schools.

Austin, 18, thinks he knows the moment he decided nothing would keep him from school. It was about fifth grade, the night before a standardized test. "I was puking buckets, and my Mom asked, 'Do you want to stay home?' And I said, 'No, I've got to go to school, I've got to take the test.' "

So at the risk of giving every one of his classmates a dangerous stomach virus, he went to school to take a test that didn't even count towards his grades. In the 1980s, the week where we took the Iowa Test of Basic Skills (ITBS) was prime family vacation week for most families, although I supposed it might be neat to intentionally infect your fellow classmates and then buy a T-shirt that says "I put the TB in ITBS".

Stefanie, like Kristen and Austin, didn't enter kindergarten intent on never missing school. The goal crept up on her. Her principal at Darnestown Elementary School, Larry Chep, gave out annual awards for perfect attendance. She won a couple, then found she "really liked being recognized for something."

There are plenty of other ways to be recognized in elementary school, most of them more fulfilling than perfect attendance. Enter the science fair. Read the most books for Book-It! and get free pizza. Volunteer to clean the erasers and get a certificate for having The Best Clap. Showing up every day just proves you had nothing better to do, which is why God invented "leave" in the workforce.

Chep remembers her as "one of those kids you want in your school."

Serious praise. I hope I'm remembered as such when I die.

Half of virgin auction goes to taxes

Dear Donna: A Pinup So Swell She Kept G.I. Mail