Ho ho ho, and welcome back from your weekend of debauchery and food. My own was quite pleasant, starting with a Friday afternoon filled with movies and Chinese food. I saw Serenity for the second time, and Batman Begins for the first. The latter was definitely good, dispelling my belief that action movies longer than two hours automatically suck (see also, Bad Boys II: Stuff Blows Up). Christian Bale made a great Batman, and Actor Who Auditioned For Batman But Didn't Get It made a great Dr. Crane. The Katie Holmes role was pretty anemic, but that generally seems to be the case with any movie where a superhero has a love interest. You'd think they could use their super powers to attract better women, but I guess women are the Unstoppable Force, even to superheroes. 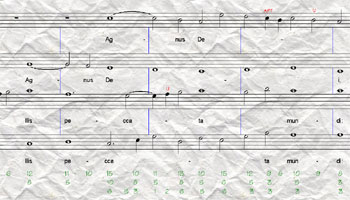 As a belated Christmas treat, I've recorded a MIDI of an Agnus Dei I wrote in 2001 in the hallowed halls of Evan Jones' modal counterpoint classroom. It uses a familiar Christmas carol for its cantus and is aptly titled, "Deck the Halls with Lamb of God"

(573KB MP3). You can see the last surviving copy of this masterwork on your right, which I narrowly salvaged from an overzealous trash man -- a slip of paper which will no doubt be worth millions some day.

Actually, the crinkly look is a feature of Finale 2006, which lets you put graphics on the score, because making the score harder to read obviously enhances a composer's creativity and makes him more loved by the irate performers who have to excavate the notes from the morass of swampy bitmapped backgrounds. It's almost as bad as company e-mails sent in purple fonts with "Piece of Notebook Paper.gif" as the background. Every company has at least one perpetrator of those.

Today, I also released an open-sourced version of my Warcraft 3 map, Onslaught

. I give it less than two months before some novice mapmaker steals it wholesale and releases a crappy derivative map, but I'm not working on it anymore and I figure that it could be a good learning tool of the JASS programming language for aspiring mapmakers. I didn't even realize that people still played Warcraft III, but I guess it's still pretty popular.

Now that Christmas is out of the way, it's time to prepare for 2006. I usually don't make New Year Resolutions and 2006 won't be any different. Resolutions are for people in need of improvement, and I have obviously been a perfect specimen of idyllic human existence since puberty (or at least since I bought a propane grill). In fact, my agent is currently in talks with the Dover Area School Board to use me as proof-positive of Intelligent Design, a lucrative deal that will also put my mug on a set of coffee mugs, T-shirts, and playing cards. In the short-term though, I'll be busy unpacking, assembling, washing, wearing, and watching my various Christmas gifts, like the cozy scarf I wore to work this morning where I managed to close it in the car door (I am a scarf newbie). Luckily the scarf survived. What did you get for Christmas?

I don't know if it was on ring or vibrate, either.