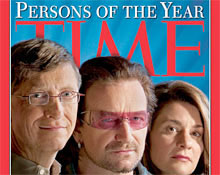 I hear that Bono is 33.3% of Time's Man of the Year Award for 2005, sharing the honor with Bill Gates and Mrs. Bill. Normally, I find celebrities' self-indulgence and disconnect with the real world highly amusing, but when it comes to Bono, I just get annoyed and impugn with impunity his worthiness to win. At least they picked two other winners, otherwise his ego might expand to an unimaginable point, increasing the surrounding air pressure, melting polar ice caps, and stranding thousands of sperm whales off an archipelago in the sea.

I'm sure Bono has indirectly done some good for Africa by wearing leather pants and rearranging the same song for twenty years, but there's just something incredibly smarmy about his moral superiority and that everpresent smirk. You're an entertainer, no more and no less. Lose the messianic showboating. Plug your cause at your next concert, throw some money at it, and go back to being an entertainer. If you're going to write songs with political messages, at least make them catchy and fun to hear (see also Green Day and Manic Street Preachers) so people who don't give a whit about the deeper meanings can still enjoy them.

Coldplay has the right idea -- they support a number of causes, all of which are linked in unassuming fonts on their website, or written in tiny print at the back of their CD jackets, with the understated message "We think these are important causes, so please visit them". In their XM interview, the interviewer asked why they didn't incorporate political messages into their music like U2. Chris Martin responded by playing a few bars from Clocks with some new lyrics about Dick Cheney, and said something to the effect of, "We could do it, but no one wants to listen to that bullsh*t". Amen, brother. Just don't name your next kid Banana, and your band will be set to steal U2's self-proclaimed "Gods of Rock" title.

When I become a rock god, none of my money will go to established charities. Instead I will donate much of it to the "People I Like" Fund, to be spent as needed by its recipients. I think that donating money in a top-down fashion is inherently flawed because everyone between you and the guy that really needs it wants a piece of the pie. But, I also think that there isn't enough time or money in the world to make things better by donating directly to the people who need the money, so why not just shrug in a typical American fashion and pay off all my friends' loans?

"There are probably more annoying things than being hectored about African development by a wealthy Irish rock star in a cowboy hat, but I can't think of one at the moment." - Paul Theroux

Screech owl gets higher than a Georgia pine

You've got mail, and maybe gonorrhea

Cameras on the Dulles Toll Road are all fake