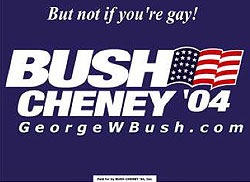 Mocking the Busy administration and reelection campaign provides me with easy fodder for news updates. Since I'm full of strong opinions but too apathetic to do much more than go out and vote on Election Day, this can be my contribution to the world of politics.

. This was coupled with House Republicans using their committee websites to engage in useful discourse about John Kerry

Meanwhile, The Bush-Cheney campaign has discontinued its poster generation tool after Bush enemies discovered they could use it nefariously to have their own slogan endorsed by Bush

I've been watching the Daily Show in the evenings when I have the chance -- I'd forgotten how funny and on target it was. After a segment where they took a gay, a jew, a black man to see the revival of Fiddler on the Roof for a panel on anti-Semitism, they tied the gay marriage debate to the discovery of gay penguins at the zoo and referred to them as "chum-guzzling".

The terrorist agenda of dihydrogen monoxide