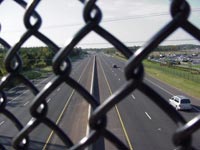 It will be nice not to have to drive up and down Route 28 every day after the move. This concrete slab stretching forever into nowhere connects Route 7 in Sterling to Manassas and other locales in the south. It's six lanes of straight and narrow, and constantly congested even at 5 AM. There are shifty parasites with radar guns camping along the exits, as well as secret spies in unmarked cars going with the flow.

Apparently the road, with all its bottlenecks and zones with no shoulders, has had an image problem, so Fairfax County is solving the problem with blinking LED signs that say "SPEED LIMIT ENFORCED - DRIVE SAFE" and "RESPECT RED".

The truth of the matter: everyone respects red so much that traffic is constantly stopped.

, has released a new CD with samples

. See what you think.

primary source on francesco sforza, where did don featherstone go to college at, the urizone makes me vomit, in the morning, in the evening, at supper time, cerebralism composer

So who did fry those locks?