Sorry for the recent lack of updates. I've been in the process of doing an annual backup of all my junk, including this website, at home. Because I update both from work and home now, I had to make sure that all my local copies were synched up to the beautiful site you see before you.

Anyone seen the show, Crossballs, on Comedy Central? It's on Tuesday through Thursday at 7:30 and pairs up supposedly real experts and comedians pretending to be experts in debates on hot topics. Last night there was a debate on obscenity in the media between a conservative and a hip hop artist who was avoiding controversy by encoding all his swear words in telephone keys, like 3285. Good stuff. Comedy Central can be hit or miss -- Reno 911 is occasionally funny and their new talk show with the guy who exudes annoyance from his pores and the scariest looking women actress in modern times looks unwatchable.

Airport police said a security screener was waving a metal-detecting wand over Miller's pants area on Friday when Miller pulled his shorts down to his ankles. He wasn't wearing any underwear. Miller then said, "There, how do you like your job," thus ending the screening, according to the police report.

It was funny enough when Blizzard's World of Warcraft gave you the option of owning pets, including Maine Coon cats, and players discovered that talking about their pets in Chat Channels filtered "Coon" as profanity.

On Tuesday, they quietly changed the name of the cat without announcing it, regardless of the fact that Maine Coon is a real type of cat, and the state cat of Maine. (Maine Coons are giant cats once thought to have been mated with raccoons. Kitty is a Maine Coon). People quickly noticed that their pets had changed and complained. The official Blizzard response included:

This non-combat pet name was changed as there were a number of concerns expressed by players that had never heard of this particular breed of cat. To them it seemed offensive, which was never our intent upon introducing this pet. I'm sorry if you're the owner of such a pet and your desire to love it has lessened since patch version 1.6. We weren't that dedicated to the name to attempt to educate people on its meaning. It's a non-combat pet. Had the name Thrall [Leader of the Horde] created an upset, we would've handled the issue entirely different, or perhaps we would've just changed his name to Green Tabby. I'm sorry that some of you aren't happy with our decision to change the name of the pet formally known as Maine Coon

The juicy irony of this story is that in an effort to make the kitty less racist, they renamed it Black Tabby.

My site was down for a few hours yesterday morning. Submitting a ticket to tech support led to the discovery that my web host (which, to date, has always seemed like a one man company) has outsourced Tech Support to India.

The Emmy nominations are out, with Lost getting 12, Arrested Development getting 4, and Alias getting 4. I find it amusing that Jennifer Garner really deserved a nomination for her acting in the first three seasons, and she gets one for the season where she phoned in half the episodes and wasn't in the other half (no doubt busy making babies, a.k.a. "suffering back injuries on the set of Elektra", with Ben Affleck).

The final movie of Old Funny Movie Week is this Nutrigrain commercial, titled "I feel great!". If you don't have a Quicktime movie player, this movie should give you the incentive to go download it

You can sleep with minors, but armed robbery will get you kicked off the team

Elmer's to drop Cow as mascot in favour of Frog

For this word, I envisioned nervous energy, constantly on the move, but slightly off-balance. I wrote it for a mythological banjo quintet that can ostensibly play without worrying about ranges because the homogenous nature of the sound seems to add to the frazzled feeling, making the listener frazzled as well.

Rubik's Cube used to get on right side of octopuses

Vote for (only one) favourite entry using the Poll in the right sidebar! Voting closes on Sunday the 19th. Remember that the winner will receive a $10 gift certificate to Amazon.com! 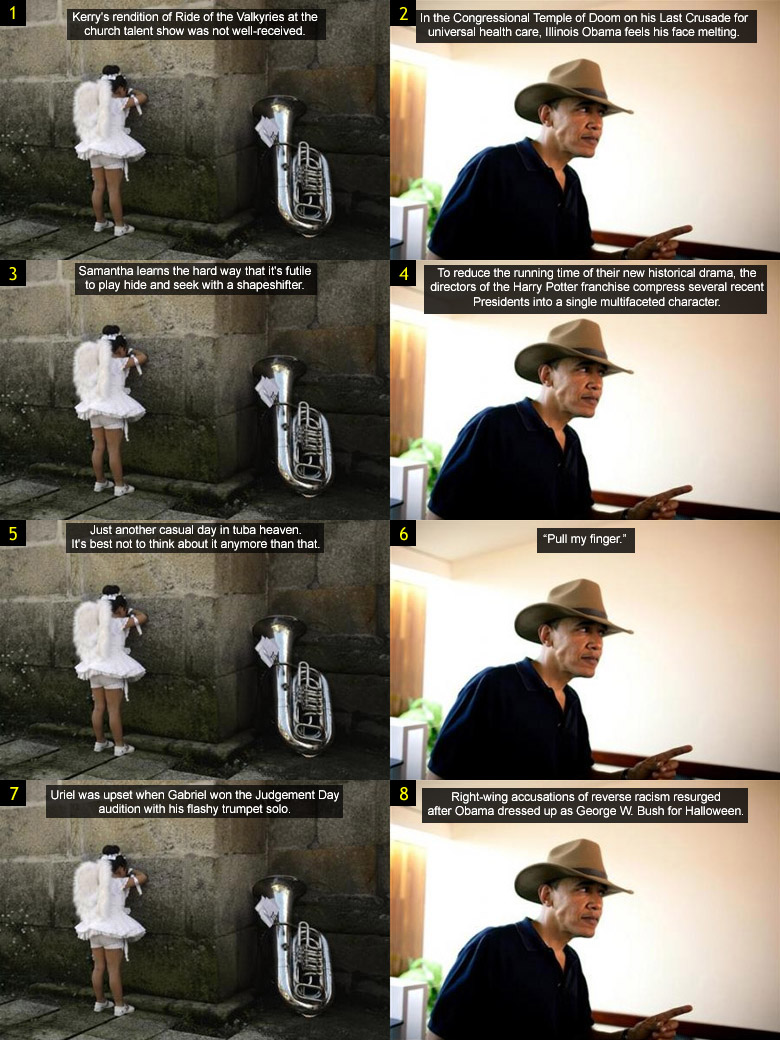 Students have the right to an orgasm

Which caption should win the contest? 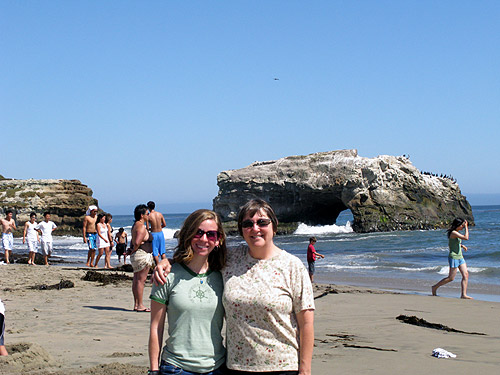 In Santa Cruz, everyone goes to the beach but no one goes in the water without hypothermia.
Friday, July 15, 2011 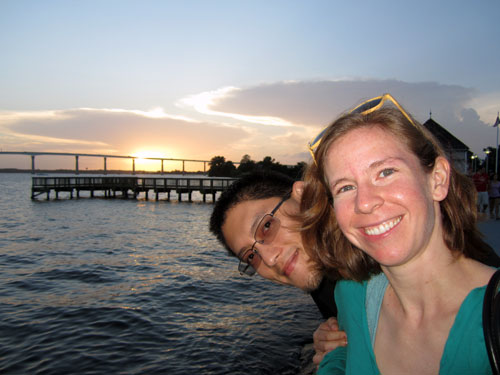 This time around, we somehow managed to avoid all of the thunderstorms, although Saturday afternoon was heavily overcast and perfect beach weather for the white person I was traveling with. We started at Calvert Cliffs State Park, where I once discovered a one-inch shark's tooth that I wore around my neck in sixth grade until it shattered. The hike to the beach was pleasant, although the beach is nearly gone, probably because of natural erosion and / or Maryland drivers.

At dinnertime, we wandered along the boardwalk to the melodic parade of souped up diesel pick-up trucks and motorcycles, and then had rare ahi tuna and crabcakes at Kingfisher's.

We stayed in a Hilton rather than a B&B this time, because of the silly "high season" rules requiring a minimum of two nights, but this was perfect for us, since it was half the price of a B&B, gave us pool privileges, and did not require us to make small talk with strangers over breakfast. Before turning in for the night, we went to the Ruddy Duck Bar & Grill across the parking lot from the hotel, and tried a nice flight of local beers. I also made the astute observation there that the average Maryland male seemed to be unusually tall, oddly proportioned, slightly douchey, and possibly on meth.

On Sunday, we went to Flag Ponds Nature Park for more beach and hiking time, but the humidity kept us from hanging around for too long. After subs and shakes at Wawa around 3 PM, we returned home to feed Booty and eat homegrown tomatoes.

Browsing through my old Amazon order history is like peeling back the layers of ash over Vesuvius. You can see which phases of my life I was in at any given time, based on the orders I had placed. 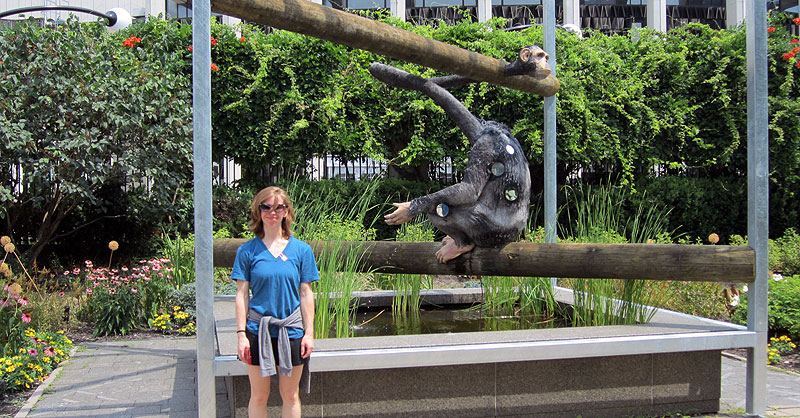 We had paid $20 each to go to the Montreal Contemporary Art Museum, only to find an endless series of "Someone really bought this?" exhibits, like a short film about a wolf standing by a fence, coupled with explanatory placards dense with language you'd find in a pretentious book review.

Here, Rebecca is standing next to a holey monkey pissing off a log. Now that you've seen it, you can skip this museum.

On Friday evening, the continuing hotness (regularly 100 degrees on our sunny porch in the evening) convinced us to stay in and have Joe's Pizzaria for dinner. Maia did not nap this day, which is why she has a 1000-yard stare in the picture below. 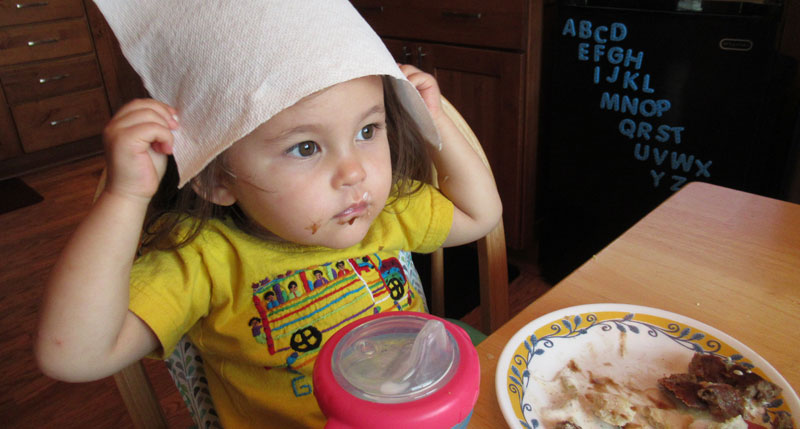 On Saturday morning, Rebecca and Maia drove to Arlington to visit with Ben, Andrea, and their daughter Amelia while I stayed home and did things like put air in Rebecca's car's tires. In the evening, we went to Cascades Overlook for dinner. We returned to the new ramen place (Marumen), this time making sure to avoid the giant rice bowls that are about 80% rice. The pork buns and sushi rolls were good, but the fried tofu had too much volume to be tasty on the insides. After dinner, we participated in Maia's favourite activity, "eating Mommy's ice cream" at Abbott's. 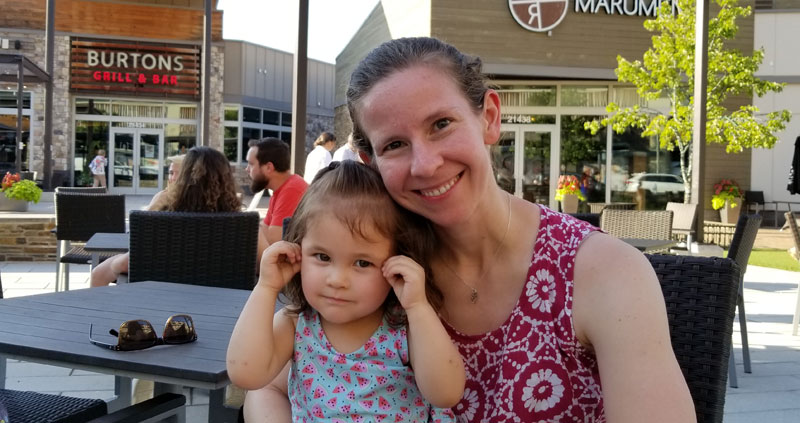 On Sunday, we went to the baptism of Janie Gillis in Arlington, followed by a brunch at the Fort Belvoir Officers' Club. The event was only marred by a 36 minute wait at the visitors' gate (sadly, my DoD ID expired in 2016 and I've never had a reason to get a new one). After we finally got inside, we enjoyed a delicious meal of breakfast and lunch foods portmanteaued onto single plates. 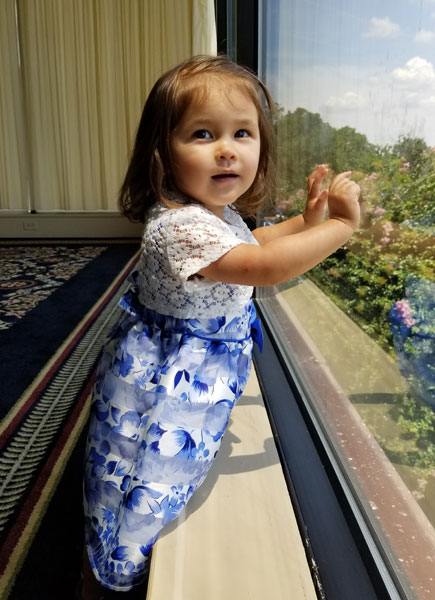 In the evening, Car and Ben came over for a Friend Dinner of Appalachian yak steaks (which taste pretty close to beef) and gnocchi. 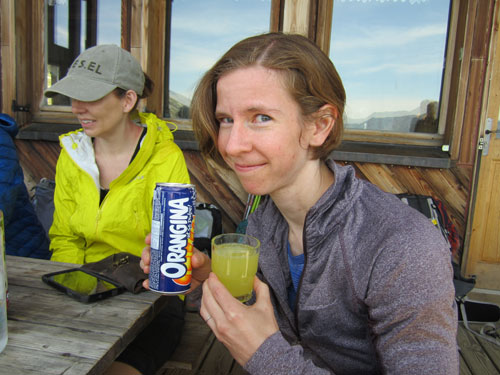 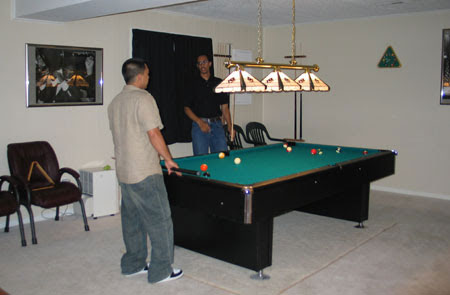 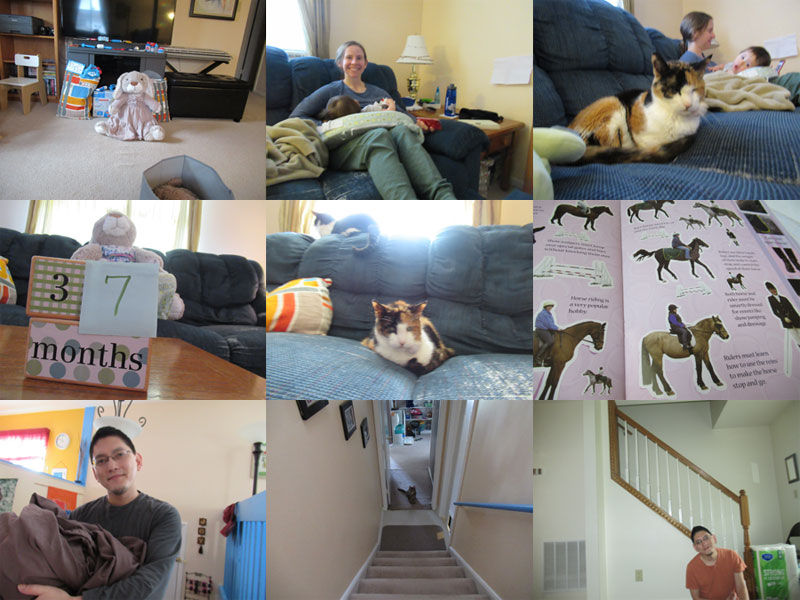 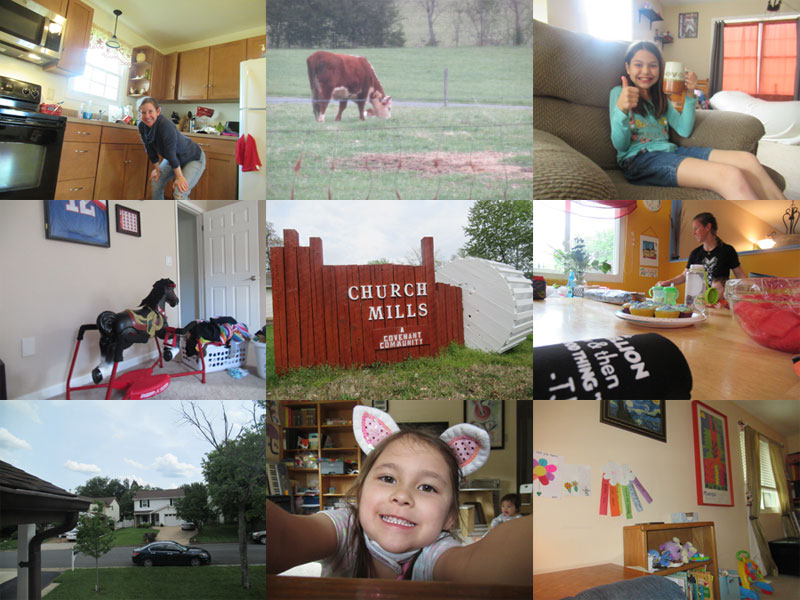 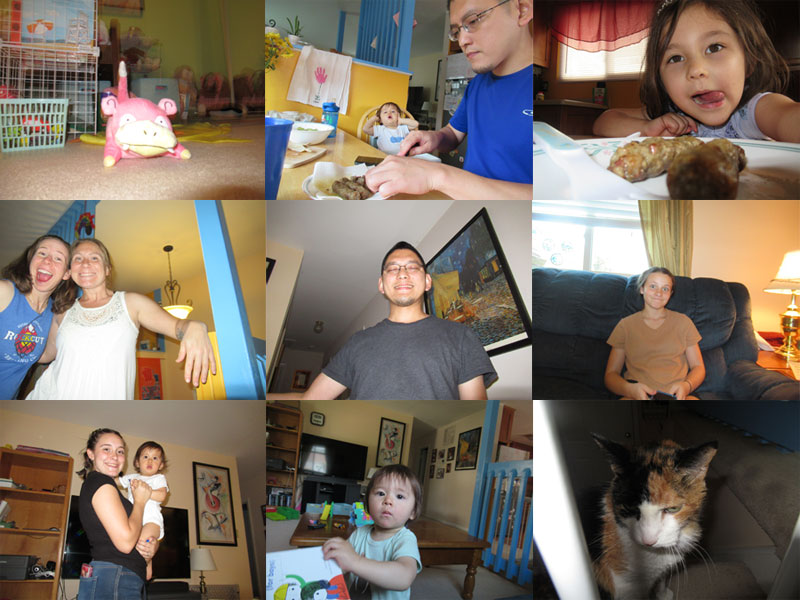 Maia shows you a picture: