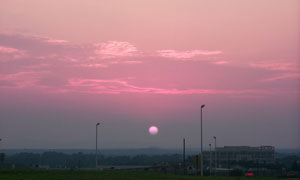 After work I walked across the street and took a picture of the sun setting on the foothills of the Blue Ridge Mountains. The haze was pretty thick today, but there will be some nice photo opportunities on a clear day.

I've readded all the URI! pictures and Delta Mu pictures to the Photos page.

Ritual murder will not get you a Parliament seat

The definition of agnostic in the Urban Dictionary

Glowing bunnies for next Easter

This can't be good for business:


I'll keep you posted as I discover details.

Jack and Kristy were married on Saturday and are currently spending nine days in Fiji for their honeymoon! Jack is the oldest childhood friend that I still regularly keep in touch with. Booty likes ribbons. 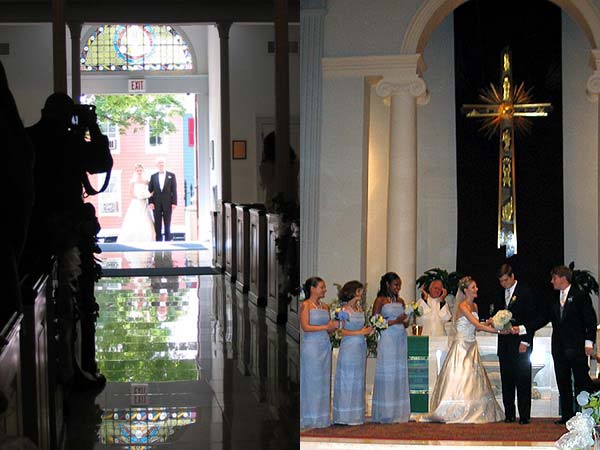 The ceremony was held at the Holy Trinity Catholic Church in Georgetown. The bridal party outnumbered the guests fourteen-thousand and five to one. 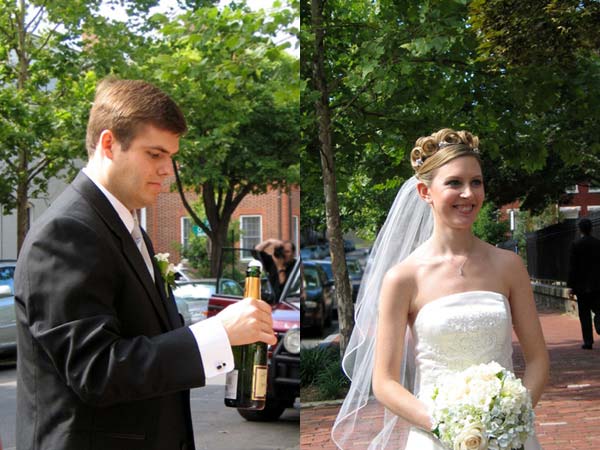 After the ceremony, guests threw a rice substitute that smelled like candy (and, according to at least one guest, tasted like it too). Jack was confused by the rapidly foaming champagne. Paparazzi photographers abounded.

I'm only including this picture for the womenfolk. All women have a centerpiece fetish. 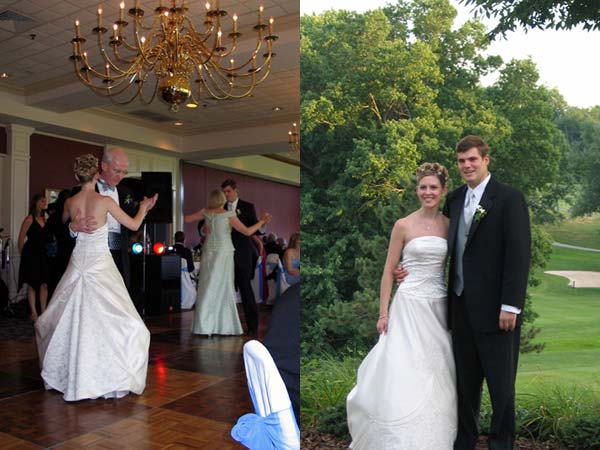 The reception was held at the River Bend Country Club in Great Falls and the filet mignon was so soft you could cut it just by staring at it. 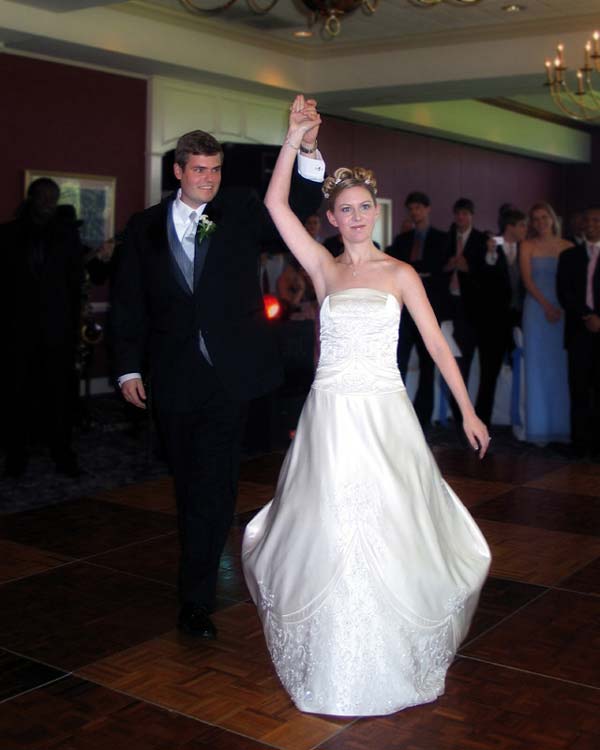 The first dance was done to "Fly Me To the Moon" and involved at least four spins. Jack must have done some hardcore practicing. 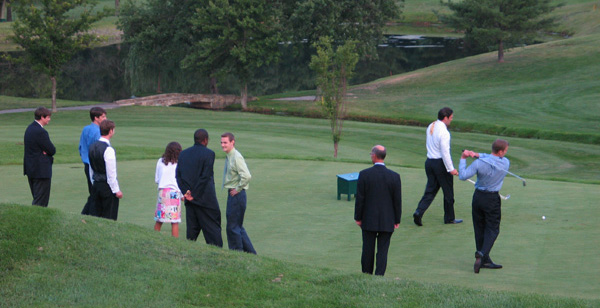 After dancing, all the guests who couldn't afford the eighty-thousand dollar membership fee of the country club took advantage of the empty greens before being chased away by sprinklers. 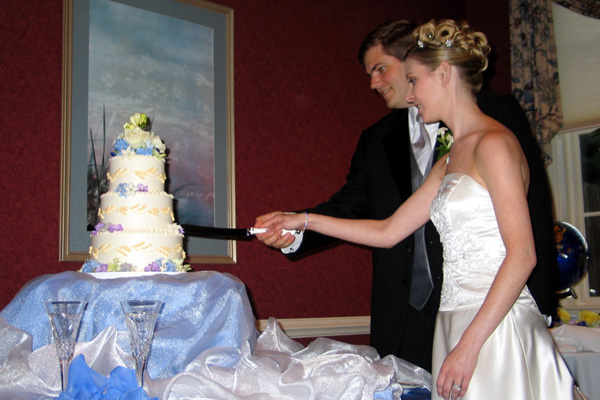 There are more pictures up on my Facebook account, and I'll get them added to the Photos section here in the next couple weeks.

Vote for (only one) favourite entry using the Poll in the left sidebar! Voting closes on Monday the 30th! 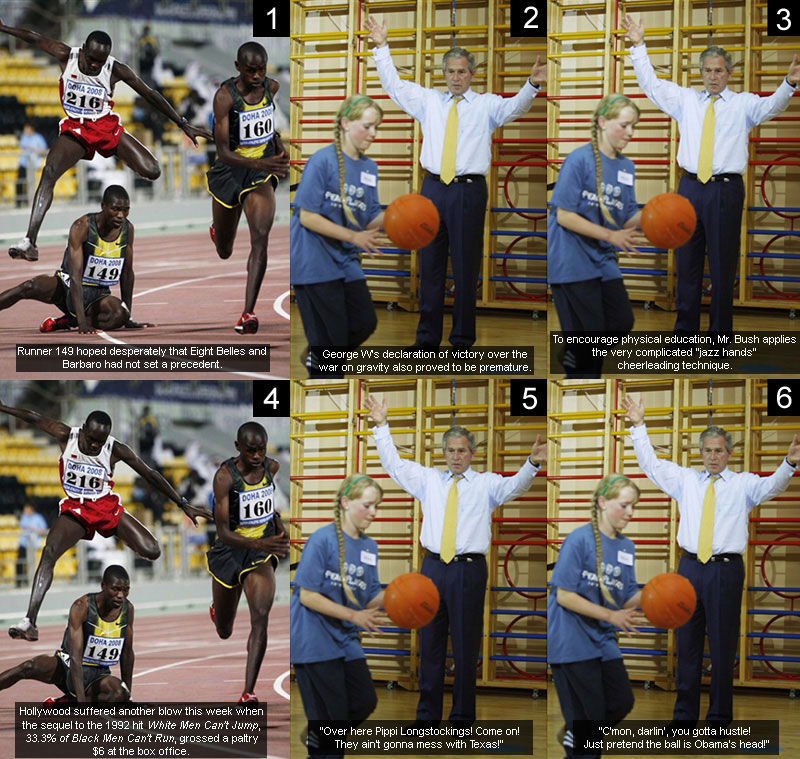 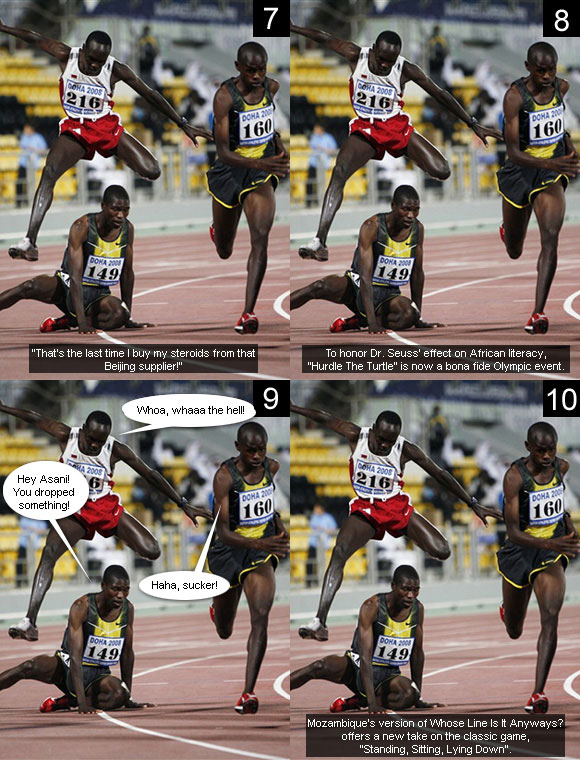 Man selling his life on ebay

There are no major spoilers in these reviews, although I do mention that Jurassic Park had dinosaurs.

Combinations by Eisley:
This is Eisley's sophomore effort, and there's definitely improvement here. The vocalist sisters still sing a little too much, in terms of voice to instrumental balance, but they now have more technique and vocal chops. A few of the tracks make them sound like less annoying versions of the Cranberries, and a few others try to be hardcore, but fail because of the light quality of their voices. You can listen to samples here -- the first three on the album are particularly catchy.

So Sudden by Hush Sound:
I was immediately drawn to one of this band's later songs on Pandora, but I like to start from the beginning when I actually purchase albums. There is a ton of potential here, but it's not as good as their later stuff. The guy sometimes strays into bad frat rock territory, and the girl doesn't have any confidence when she sings, but there's plenty of room to grow -- I'll probably buy the next album as well. The most detracting part of this CD is actually the sound mixing / producing -- it's mostly flat and doesn't do anything to bring out the vocals, as if someone recorded it on a Minidisc player in a club. You never really know how much a good sound engineer can do until you hear an example of bad mixing.

There are no samples for this one, but here's one I got off the CD:

Jurassic Park I and II:
These two movies have actually aged pretty well over the last decade -- even in hi-definition, you can't tell that the dinosaurs are made of Cheese Whiz and toilet paper. I really prefer the second movie over the first -- it's nonstop action and people getting eaten by dinosaurs. The first has a boring first hour followed by a great thirty minutes, as if anyone going into the movie theatre did NOT know that dinosaurs were somehow involved (SPOILERS!) I am scared to watch the third movie out of fear that it might sully the Jurassic branding.

Sinkholes swallow up the unwary

Crop circles made by stoned wallabies 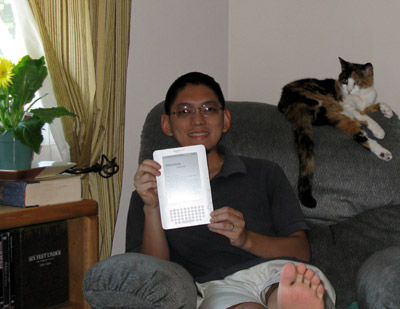 This is me on my day off with our new Kindle.

Have a great weekend!

California whooping it up

Rebecca leaves on a 1000 mile road trip tomorrow, burrowing into the Midwest like a prairie dog after farm subsidies. When it comes to driving and vacations, we dwell in two separate camps: I was indoctrinated to think that the drive is a necessary evil keeping you from the fun, so its length should be minimized via 4 AM departures, radar detectors, and traffic avoidance, while to Rebecca, the trip itself is part of the vacation. So for this trip, I will be staying home and making my own fun. Here are some of the fun activities I have planned: 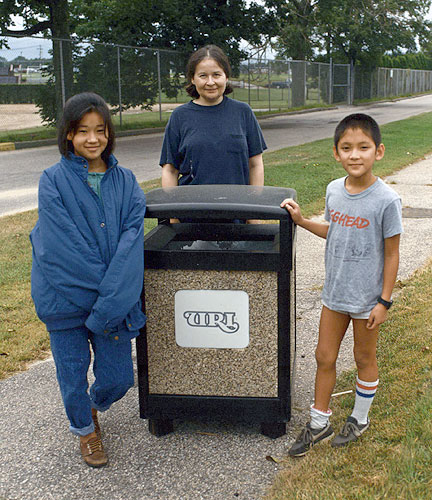 This picture was taken on a dreary, overcast day on the campus of the University of Rhode Island. Although I don't have an exact date for this trip, I would peg it around early 1990, based on Ellen's baggy clothes (which were the style when she was in 7th grade), my Egghead T-shirt, lack of glasses or British Knights, and giant waterproof wrist watch that could tell time in every world time zone.

Update from my Dad: "Your photo of the day dates to August 1989. The highlight of the trip, you might recall, was our visit to Lexington and Concord."

Robocop (2014) (PG-13):
I was surprised by how much I enjoyed this remake of the 1987 classic. The remake manages to tell its own story while still hitting a few major story beats. Where the original was a satire of society cloaked in a violent action movie, this iteration focuses heavily on the moral questions raised by fusing humans with robots, and the mental conflict between being human and having an AI. It stands well on its own, and limits its callbacks to the original to a few quotable lines. Free on Amazon Prime.

Derek, Final Episode:
The British love their Christmas Specials, and this extra hour-long episode permanently wraps up the series in a warm way. It suffers a little from the second season exit of Karl Pilkington, but otherwise goes out strong. Free on Netflix.

Mr. Robot, Pilot Episode:
The pilot episode of this new USA show hits all of the right marks, and leaves an intriguing setting that I would enjoy exploring in future episodes. It feels a little too like Fight Club sometimes, and Christian Slater just acts like Christian Slater, but otherwise, the characters are interesting. This may also be one of the few shows that gets its technobabble and computer screens right -- it's hard to make computer hacking exciting without someone yelling "Enhance!" while zooming in on Google Maps, but Mr. Robot pulls it off. Free on Amazon Prime.

The Book of Mormon:
We saw this show at the Kennedy Center last week and thoroughly enjoyed it. It's highly profane, has a definite vein of South Park running through it, and will keep you laughing, although it's probably not a show you need to watch more than once. The cast and the pit orchestra were both universally strong, although the overwhelming wall of sound often prevented me from picking up the nuances of the book. It's easy to hear the lines that elicit laughs, but less so to understand the chorus.

On Sunday, we went to one of those date nights where you drink wine and paint a picture. Here's the original: 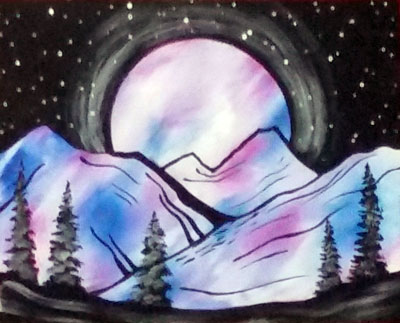 This chart shows a typical summer day in the life of our family. The red overlay shows who's keeping an eye on Ian at any given time. 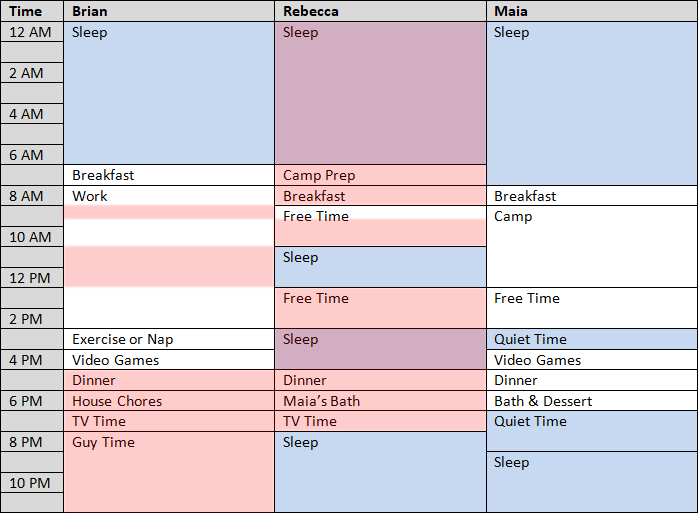