Ian is now 41 weeks old, just 11 weeks away from a full year (also, the longest year of my life). 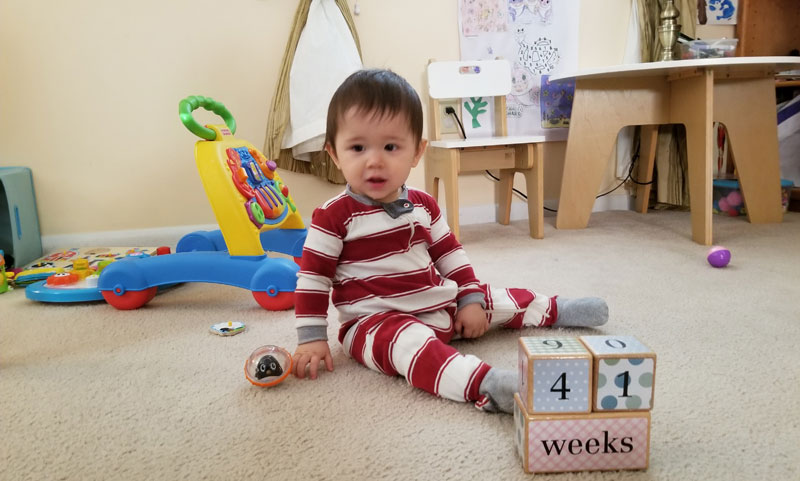 He started truly crawling at 39 weeks, which is great for being able to better entertain himself, but worse for keeping things like electrical cords out of his reach. He loves to pull himself on the coffee table, only to let go and bash himself in the face on the way, resulting in crying.

He likes playing with anything that has wheels most, followed by toys that make noise or motion. He also likes opening the glass doors of my 2000s era TV cabinet and slamming them shut.

Ian's language skills are improving. He will clap when we say "Yay!" and his most common utterance is either "DA!" or "a-DA!". His mouth is always open, so everything we own is covered in drool.

His favourite animal is Amber, who tolerates babies much more now that she is deaf. If given the chance, he will roll all over her (or her sleeping pillow), and Amber won't run away until Ian has grabbed her fur for the fifth time.

Ian eats a lot at every meal, preferring veggies over dairy-enhanced products like mac and cheese. He eats a whole banana (the big size) every day for breakfast, with other meals a mix of carrots, wheat, and ground meats. He loves puffs.

He naps twice a day, for about 1.5 hours each, which is a huge improvement over Maia, who only slept about 4 minutes during each day. However, when he's up, he's UP, demanding your undivided attention and chastising you for focusing elsewhere like a teacher from the 50s with a ruler for your knuckles. 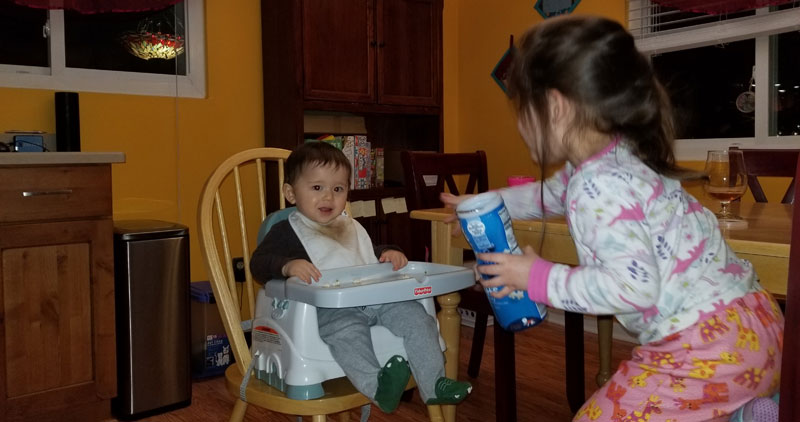 Ian is unperturbed by TV, watching for a few seconds then moving on to find anything else in the room to move, shift, or slobber on.

Rebecca adds that he has a really nice laugh, which we elicit by disappearing and reappearing around a corner or with tickles. He's seen some of his contemporaries at daily exercise classes ("Stroller Strides") so he is not totally alone in these pandemic-affected days.