By week and by month seem like too short of a period to keep writing these Battle Reports, but I feel like I should check in occasionally to make sure that the miscellaneous quirks of our daughter are not forgotten. 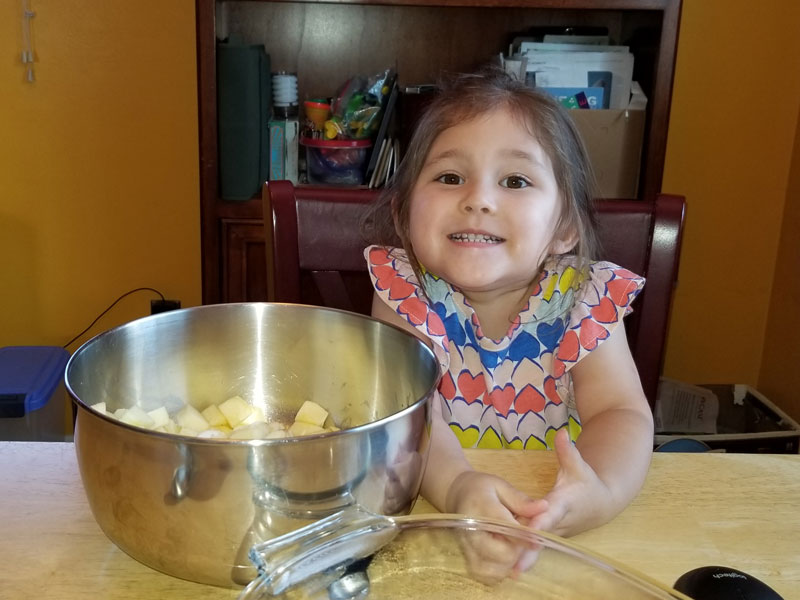 Maia is now 2 months beyond the age of 3, has reached the age where she clearly has a short-term and long-term memory and is mostly capable of communicating with us. On Friday, she reminded Rebecca to bring cash in the car because the apple-picking farm didn't accept credit cards. She finds it easy to express herself, repeating stock phrases like "I'm so excited!" that she's heard elsewhere. She'll also say, "I love you too!" if you start.

Maia still loves dresses. We've moved all of her daily wear dresses (most of which came from Ghazaleh) down a level in the closet so she can reach them. She regularly changes out of her PJs at bedtime to wear a dress instead. Usually, she'll put one on normally and then another around her waist to make a double layer. The fancy dresses stay up high in the closet but they still get used and dirtied within each week.

She either sleeps very well or she doesn't. Naps are mostly out, but she'll often sleep undisturbed from 8 PM to 8 AM, After waking up, she'll play with her Duplos for a bit and then start knocking on the door (which still has a child-proof cap on the knob) and asking us if we want to build a snowman.

Maia had a great time at the beach last month, but she mostly enjoyed having "big girl friends" in the form of the Smiths' daughters. As we drove away, she pointed at a windsock with the American flag on it and said, "I see an American jellyfish!". She's usually easy to understand now although she rarely pronounces the 2nd consonant in a word -- this is especially difficult with "crowds", "clouds", and "cows", all of which come up in daily conversation.

For a brief period, she would hop on the couch and say, "Mommy, I'm HERE." when she wanted to watch Frozen for the 8,000,000th time but that thankfully didn't last. She hasn't watched Superwings in ages, but will watch chunks of the Frozen saga 20 minutes per day or watch Rebecca die a lot in Captain Toad: Treasure Tracker on the Nintendo Switch.

She easily counts to about 12 and can play cursory games involving dice or dominos. She got a Frozen-themed version of Chutes and Ladders from the Smiths which she loves to play with us or by herself during her naptime.

This past weekend, I moved my home office into the basement to take advantage of the quieter, larger space. When we asked Maia if she wanted to move her bedroom into the now-empty office, she thought for a minute and said no because "my toys are in my closet and you can't move the closet". The empty room is now her "kitchen" and comes complete with a "no clean up" rule which means that I don't have to ruin my back picking up toys in there.