There are no major spoilers for either of the first two books in this review. 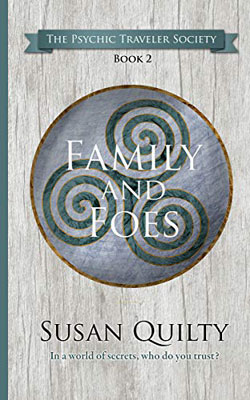 Family and Foes is Book Two of the YA Fantasy series, The Psychic Traveler Society. The story centers on a fifteen-year-old protagonist with typical adolescent woes whose recurring daydreams lead her to a secret society and the possibility of other worlds.

The ending of Book 1 left the main characters in a setting filled with plenty of untapped world-building potential and unresolved conflicts. It felt more like an interim stop than a terminus, so it would have been safe and predictable to pick up right where we left off. Instead, Susan Quilty succeeds at delivering something more ambitious and risky, shifting the focus to another locale that simultaneously scales out the series universe and deepens our understanding of the Psychic Traveler Society at the center of it.

While taking the action elsewhere may disappoint fans invested in the strife on Terra-V, this allows the author to explore a lot of different ideas and avoid getting locked into a pure YA Fantasy plot. Themes from Quilty's first book, Insistence of Memory, emerge periodically, reinforcing the main character's inner turmoil about what she's told to believe by people in authority.

There's a perfect balance between the mundane challenges that Amanda Jones faces in high school and the more fantastic elements. The author does a good job writing a teenager who's not always likeable but reacts with believable internal consistency. Tension in each half of her compartmentalized life bleeds across the boundary despite Amanda's best efforts and keeps the real world scenes relevant -- I never felt like I was skimming through them just to "get back to the good part".

Book 2 was a fun journey but I'm looking forward to Amanda Jones having more agency and control of her fate in future sequels. The fact that she's an impetuous teenager is a critical foundation of her growing maturity, but it also leads to scenes where the plot is happening around her rather than as a direct result of her intentions and actions. I hope that Book 3 will allow the other characters to stop reacting to what she might become and start experiencing what she's actually capable of.