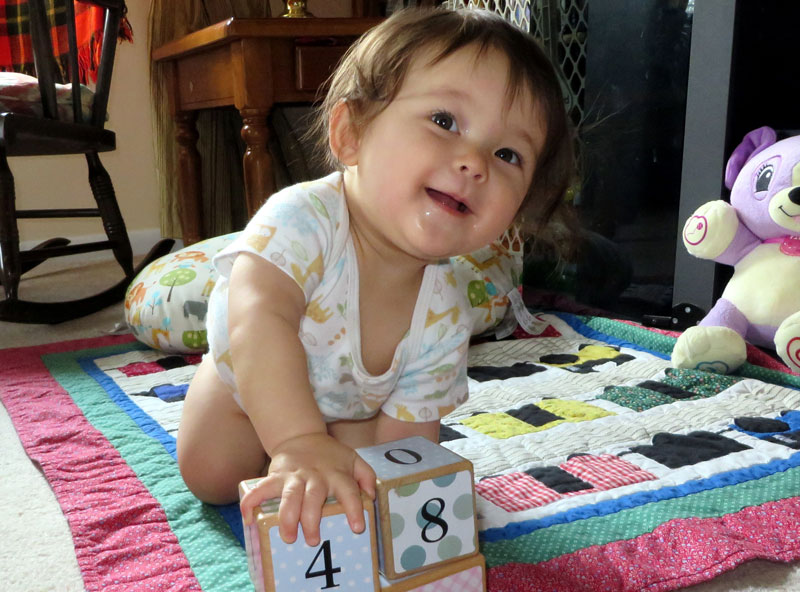 Maia is now 11.0466 months old and reaching the end of the phase where everything is rigorously documented -- the next Battle Report will liking come out in 2035 and cover her angst in choosing between Virginia Tech and an out of state school because all of the other in-state schools will no longer exist due to inferiority. Maia still weighs in the 16 - 17 pound range and crawls all over the place. She can clamber onto platforms less than a foot off the ground and then use that perch to get elsewhere higher, but cannot yet go up stairs on her own. She has one more front tooth growing in from above now for a grand total of 3. Like her father, she is already adept at accidentally biting her lip between these teeth.

We've settled on May 14th being her first word day. It was just "Dada", but she pointed and laughed at me like a bully while saying it so clearly it has a connected meaning now. She still says "bwa" more than "dada" though.

Maia hates being on the changing table unless distracted by a toy, and loves being in the bathtub for her twice weekly bath. Last bath, she ignored every single bath toy and played with her belly button the whole time -- she has a future as the Army Liaison to the Office of Naval Contemplation.

She has almost every room of the house open to her now and is often content to just sit around playing by herself while we do our own thing nearby. A common game is to take things out of one container and put them into another. Another game, called "Truffle Hunter", is where she wrinkles up her face and makes heavy breathing noises. She still has not caught the cat, but the cat allows her to get within 5 feet of her before moving away -- I'm sure they'll be best friends in about 4 years.

There has been a gentle upswing in the amount of work I'm taking on, which makes the days a little bit longer. However, this is balanced out by the consistent 90 minute nap that Maia takes every day around 1 PM. The second nap is hit-or-miss -- it's either 30 minutes of crying followed by 30 minutes of dozing, or a full hour of fussing. I expect that this 2nd nap will be the first one to phase out as Maia grows up! 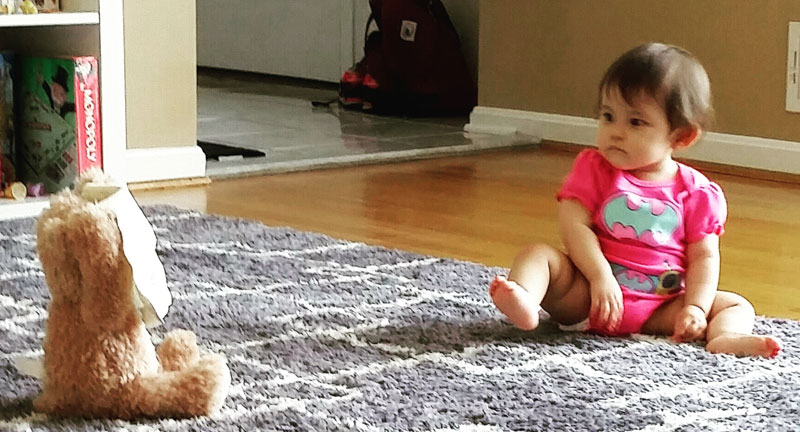