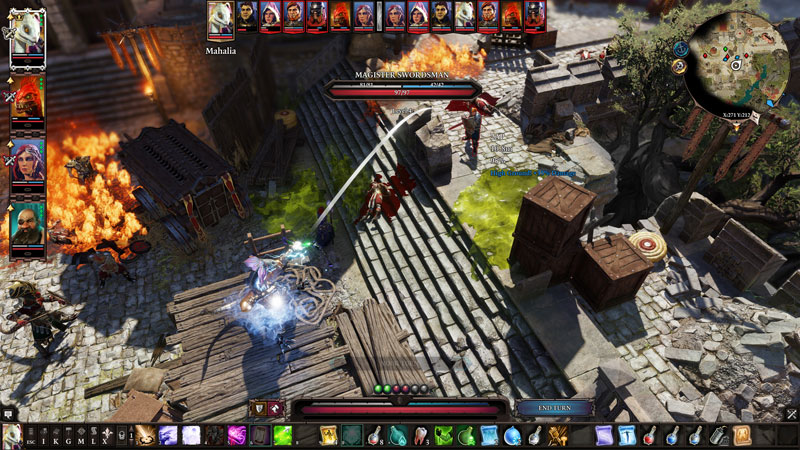 Divinity: Original Sin 2 is an excellent Kickstarter-based, old-school role-playing game with minor deficiencies that will probably be ironed out in the Enhanced Edition coming out later this year (free for owners of the original). It features a top-down view with a fully rotatable camera, turn-based combat built up around Action Points that allow you to cast, attack, or move specific amounts, and an involving story based in high fantasy without feeling overused. If someone were to modernize Ultima 6 and Ultima 7 today, this is probably as close as you could get to those classics.

I enjoyed the original D:OS game until its cumbersome UI got in the way. This round is much more polished but still a little on the clicky side -- my hands grew tired after gaming sessions in a Diablo 3 type of way. The first thing to experience is the completely open-ended character creation system with multiple races and classes that provides a starting point for your character but doesn't lock you into any permanent decisions. There are 6 ready-made characters with involved plot lines, as well as the option to roll your own. Instead of just attributes and skills, your character's build is broken down even further into attributes, talents, civil abilities, combat abilities, and finally skills that you can purchase based on which abilities you've selected. The sheer amount of options will give you party paralysis (as a perpetual reroller, I'm relieved that I managed to reroll only twice before committing to the rest of the game).

Graphics, sound, and presentation are all excellent, with great voice acting for every role and the ability to skip cutscenes. Combat is intentionally challenging, with overwhelming numbers of enemies that will quickly mow you down unless you maximize the use of the element-based battlegrounds (such as casting a rain spell to get the enemies wet then using lightning on them for bonus damage). Thankfully, there is also an easy difficulty mode for people that just care about the plot. Though I enjoyed the challenge in combat, it eventually wore me down. There are a limited number of set encounters (no random ones) and I always seemed to hit them just before I'd planned to stop playing. Encounters can last forever with so many characters taking their turns, especially when you die and need to try again.

I pooped out on D:OS2 about 2/3rds of the way through from simple fatigue -- there is so much to do and explore that it's not a great fit for my completionist tendencies and the journal system does not do a good job of juggling enough information for all of your different quests. Since I like to explore the whole map, I would also stumble into bits of the story that I didn't know I was supposed to be doing yet, which made some of the sidequests more confusing. In the 90s, this flaw would proudly fall under "old-school charm".

Still, I got a solid 50 hours of enjoyment out of this game and would recommend it for anyone who wants a classic RPG experience. I can see why so many publications made it Game of the Year last year even though no one in mainstream gaming had heard of it.