What's Next for the URI! Zone? 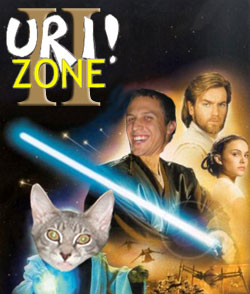 Observant calendar watchers might notice that the 20th birthday of the URI! Zone is creeping closer. Ten years ago, I laid out my plan for a trilogy as follows:

The first ten years of my site, 1996 - 2006, served to introduce the principal characters (Booty) and supporting cast (me and Doobie), while providing enough back story and trivia on everyone involved to keep my readers empathizing with the protagonists. The second part, 2006 - 2016, will document my struggles and conflicts up to the ripe age of 36, although I haven't yet picked a suitable title yet since The Empire Strikes Back was already taken. Finally, 2016 - 2026 will tie up all the mysteries and drama from the first two parts with salty dialogue and a moving musical score. I don't want to spoil anything, but at least one person who's going to die in Part II will come back to life in Part III.

I've maintained my 5-day-per-week update schedule over the past few years in spite of steadily declining readership, to the point where I'm mainly just keeping the lights on for a handful of people bored in their cubicles not yet ready to start working for the day. Looking ahead, here are some thoughts I've considered for the next decade of posts:


As a member of the elite intellectual group that still reads blogs in 2016, what are your thoughts? Suggestions, votes, and alternatives welcomed!