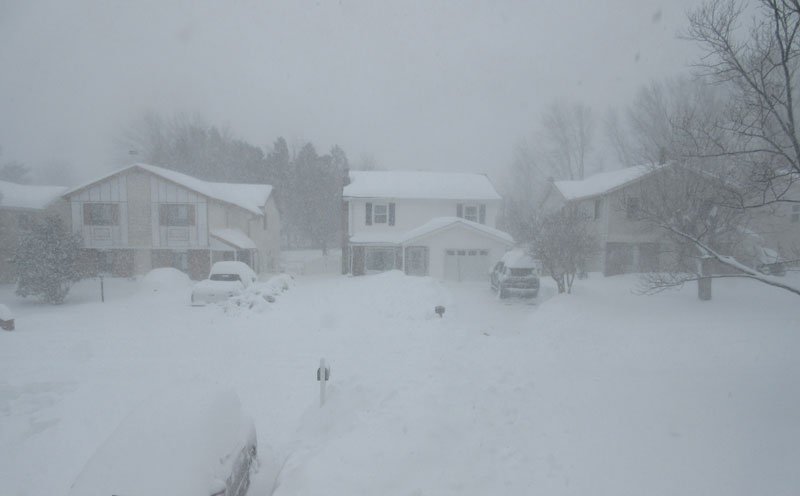 With plenty of advance warning, we lived through the most recent blizzard (dubbed with the awful name, Snowzilla, which sounds like a white theme for Firefox) in relative luxury. On Friday, I worked from home on proposal stuff while Rebecca went to work on a pre-determined half day with a company party at Texas de Brazil at midday. Snow was already coming down by 2 PM here, and I had a big pot of 3-bean chili going in the slow cooker for dinner. We watched Empire Strikes Back and then devoured our chili.

On Saturday we did a preemptive shoveling attempt, but it had minimal effect. The picture above was taking around 3 PM, just before the storm amped up yet again to drop another foot. Saturday dinner was more chili, a giant batch of chocolate-walnut cookies we had baked, and the movie, The Martian which didn't suck.

By Sunday morning, we had gotten up to about 29 inches. We, and the rest of our neighborhood, dug out in the morning, although a portion of the cross street that we use to exit the court had been designated as a dumping ground for snow from the main road. We haven't seen a plow yet, although a neighbor further down the court did an obligatory drive through that barely helped. We chatted with our neighbors (annual effort) and learned that the house two doors down from us had become an addiction halfway house several months back, which is why we see an ambulance there every other week.

In the evening, we went for a walk around the neighborhood. Main streets within a quarter mile looked somewhat good, but getting there would be a huge problem. Luckily, Rebecca's job cancelled today, and my own can be done from anywhere with Wi-Fi (thanks, technology career!) We finished the night off with buffalo-infused meatballs, and Everest, which also did not suck.