January 6, 1996 was a musically enriched day in my senior year of high school. In the morning, Mike Stafford and I carpooled to West Potomac High School for All-District Band tryouts. For the uninformed, All-District Band is a three day weekend event where you sit in all-day rehearsals with area high school musicians who all think they deserve to play the solos, while a guest conductor trying to earn a little extra cash on the side of their meager symphony day job paycheck berates you for your mistakes and rants about how much better they are than you because their name is Gene Corcoran.

I was not big on All-District Band, even though it allowed me to skip a day of school. However, trying out for the band was just something everyone assumed you would do if you took private lessons, not unlike assuming that any given episode of LOST involving a submarine is bound to suck. My apathy at the audition led to these less-than-stellar scores, which were just high enough to get last chair: 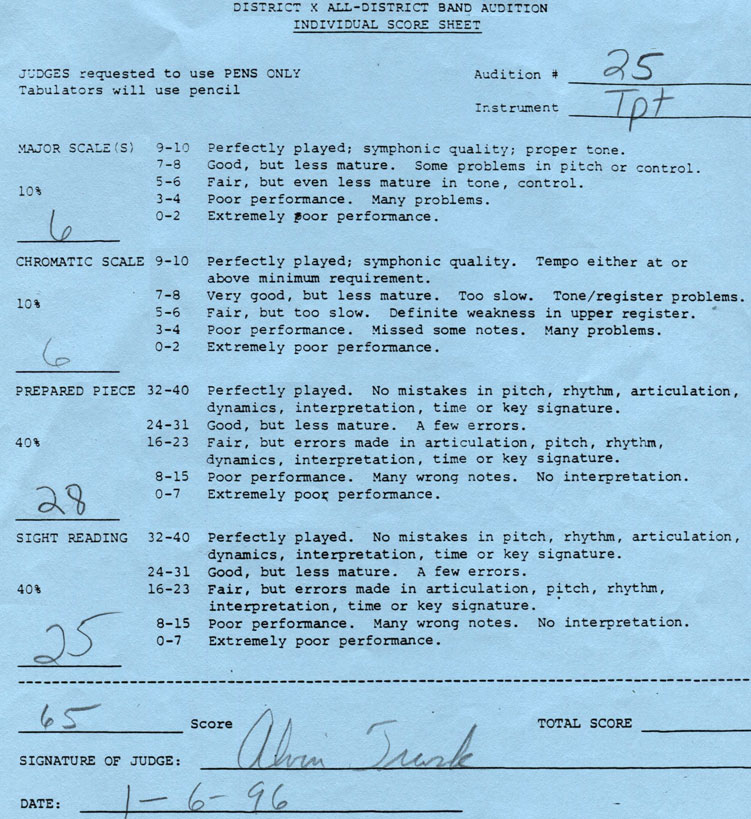 (Going to any all-day band rehearsal as a last chair player is a special kind of pain, so I later conspired with winter to cancel the '96 District X All-District Band weekend with record snowfall).

Later that afternoon, I finished writing my 8th composition, Benality, a stupidly-titled concert band overture from the early days of composing when you think that modal lines are more fun than functional harmony.

The piece's primary fault is that it spends too much time adding flurries above a repeating rhythmic vamp and not enough time developing new ideas -- too much Swearingen and not enough swearing for my modern ears. I also apparently thought that it would be trivial to roll 6 or 7 separate timpani onstage, so it's probably good for percussionists that this piece was never performed.

Once I had forcefully expressed music out of every orifice that day, I met up with Jack Wilmer and saw 12 Monkeys in the theater at Bailey's Crossroad (long since replaced by a Target). Movie Night with Jack was a regular occurrence in high school, but I didn't make it to the theatre a single time in 2015. Perhaps I need an Alamo outing in the near future.