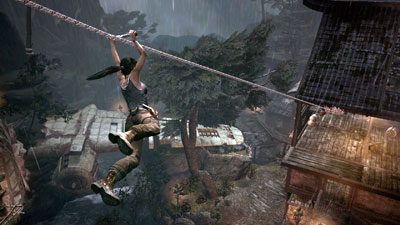 I was never really submerged into the cult of Tomb Raider -- I never saw the movie and never dressed up like Lara Croft at a convention. I played the original game for about 10 minutes and only recall being killed by a dinosaur while the game camera was stuck on a wall and stuttering along at 3 frames per second.

The new Tomb Raider game is a reboot / origin story, because that's the fashionable thing to do with old intellectual property these days. (I'm suprised that we haven't seen an origin story for Pac Man yet). What this means to gamers is that you need not be familiar with any of the older games. The story is interesting enough to hold everything together, and while it's not as deep as a Bioshock game, it's still better than Indy 4, in spite of some flat caricatured supporting characters.

Graphically, the game is beautiful. It's nice to be gaming in an era where exceptional graphics are the norm and cutting edge hardware is no longer needed. More important than the graphics, though, is the core gameplay. Controls are tight, leaping through the air across canyons fills you with adrenaline, and the camera shifts perfectly to capture the action at the best action-movie angles. I didn't think I would say this in my lifetime, but this is a 3D game where jumping and climbing things is actually fun and never frustrating. The stealth and shooting portions of the game are serviceable, but I actually had the most fun when no enemies were around, simply exploring, scaling insanely vertical buildings, and gathering archeological relics from puzzle tombs. 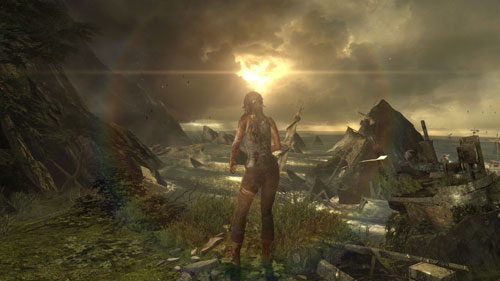 The second flaw is the abundance of "Quick Time Events" where you'll be watching an animated cutscene and suddenly a button appears on screen which you have to press or mash repeatedly. Failing at one of these events leads to death, which leads to starting the sequence all over again from the beginning. These events gave me PTSD flashbacks to the arcade game, Dragon's Lair. Around the age of six, arcade visits would start immediately with 75 cents wasted in this game, only to fail somewhere near the beginning every time. I would then be out of quarters for the next hour, forced to watch my friends who had wisely picked the safe mutual fund of the arcade, Skeeball.