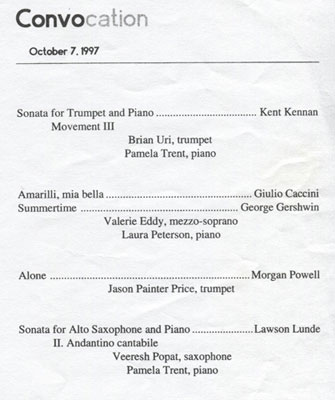 Sixteen years ago, the weekly performance by music majors was a pretty dull affair. I opened the afternoon with the third movement of the Kennan trumpet sonata, purely on its virtues of not being the first movement, which every other trumpeter in the world played. Not being destined for a trumpet performance degree, I only made it sixteen notes in before flubbing a note.

However, I feasted on the rhythms like a side of contrapuntal fries where other trumpeters just gave up and rebeamed all of the complex meters into 4/4 time. This was helped by the fact that I also transcribed the entire accompaniment into MIDI and spent hours in the practice room playing with a cassette tape (because I dislike people and also paying accompanists). If there ever comes a time where a master trumpet can be fashioned like Voltron, I'll gladly contribute the rhythmic engine of perfection.

Play along with the Kennan at home (21KB, MID)

Later on in the program, Jason Price gave one of his masterly renditions of a solo work that was the equivalent of a homeless man on the subway talking to himself -- these performances never did much for me, but the other trumpeters would spend hours afterwards discussing his awesomeness.

The hour closed with a saxophone sonata, which can can also be found in the dictionary under "perpetually unnecessary".