Eighteen years ago today, on October 30, 1995, I was a senior, and unimpressed with my curriculum.

Today was just a normal day. Before class, I went to the guidance office and got my class rank (for this year not last year) and I'm 1 of 512. But anyone with over a 4.0 is 1 so I'm not that special. Theory was pretty dull. There's two guys that don't understand anything that's going on and it's really annoying when they guess random answers to questions. In english, we discussed the book we're reading, Portrait of the Artist as a Young Man some more. I don't like the book too much. It's too deep.

Fourteen years ago today, on October 30, 1999, I was composing stuff and going to Halloween parties. Also, the night before, I had given my roommate, Kelley, a copy of Starcraft as an early birthday present and he went on to nearly fail out of college.

Saturday morning was a brass rehearsal. We practiced ~7~ for today's concert, and then I went costume hunting with Shac, Kelley, and Nikki. We ended up at Walmart and bumped into John, Jason, Rosie and Jen who were also costume hunting. In the evening, I went to Symphony with Shac, Liz, and Nikki. The concert was quite good. After that, I went to Squires and played through the Arutunian in preparation for Monday night's solo competition. I think it will go well. Once done, I took Nikki and Liz to the tuba house for the grain party. A few other people I knew were there but not many. Rosie showed up later on and we all took pictures with each other.

Here is a picture from that party. When math majors asked what I was, I said "a physics major", but I told everyone else "a math major". 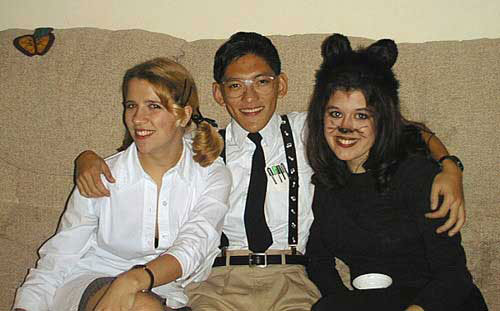