Twenty years ago today, on September 25, 1993, my family was on a Virginia road trip to visit college campuses for my sister's sake. This was the southeastern leg of college season, and in the space of about 18 hours, we visited Mary Washington, William and Mary, and VCU. We stayed overnight in a shady, cheap motel in Newport News, with the parents in one room and my sister and I across the hall underneath a happening motel party. After we beat on the ceiling, several burly guys came downstairs and told us (through the door) to mind our own business. On the way out of town, our college guidebook told us that we were near Christopher Newport College. Not realizing that it was a commuter school (and thus, a single building with a parking lot), we were already a mile past it after blinking and missing it, and thus, we were unimpressed. 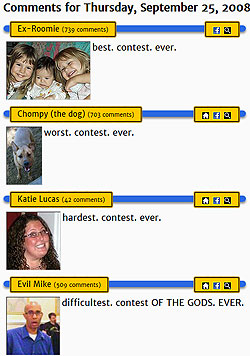 Fifteen years ago today, on September 25, 1998, was the night before a VT-Pitt football game, and my parents were in town for Band Parents Day. We ate at "Pizza Inn" somewhere in Christiansburg because all of the closer restaurants were either too crowded or too expensive. I was unimpressed by the pizza.

Ten years ago today, on September 25, 2003, I worked an eight hour day (from 6 to 2) at FGM. I had a 10 AM meeting, and then spent the rest of the day doing documentation and researching how to integrate WebLogic 8.1 Portal Server with a content management system which was not impressive. After work, I walked my rent over to the office at The Elms in Centreville ($1135 for a two bedroom apartment). I always delivered my rent checks in person because of the cute woman that ran the rental office.

Five years ago today, on September 25, 2008, I announced the results of everyone's favourite Name That Tune contest, where all of the songs were playing at the same time. After work, I drove to Tysons and paid $131.25 to get Rebecca's engagement ring appraised, although she would not know of its existence for another 9 days.

One year ago today, on September 25, 2012, we had dinner at Sweetwater Tavern, as I was still trying to decide whether it was worth eating at or not. I remain unimpressed.