as seen at the Signature Theatre 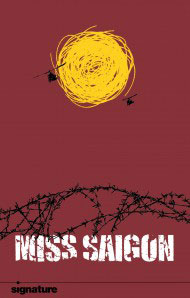 Of the Schonberg and Boublil musicals, I've always felt that Miss Saigon was the best holistic merging of story, music, and craft. Les Miserables, in spite of its role as a Broadway national treasure (sans Nic Cage), has a tiresome timbre problem and runs out of interesting orchestrations around the two-hour mark. Martin Guerre shared too much DNA with Les Mis to work on its own, and Pirate Queen was a completely forgettable cut-and-paste of measures from the other musicals. I hadn't seen a production of Miss Saigon since January 2004, and was eager to see how it has aged.

The weakest link in the show was the reduced-size orchestra. The musicians did their best, but were held back by jarring keyboard patches from the late 1980s, and not enough strings to really fill out the thick harmonic pads originally envisioned. The trumpeter may have been a puppy, given his overzealous excitement to play each high note as loudly as possible -- I could picture him sitting in the back of the pit thinking, "Ohmigod! I get to play high notes, yay! Here it comes, almost there! Isn't this fun?" BRAWWWP! "Yay there's another loud, high note in two bars! Rest in peace, Maynard! Hooray!"

I didn't care much for Ellen (either the character, the performance, or my sister). Although she was partly held back by the uselessness of the role in general, it didn't help that the first eight bars of her entrance were too low for the actress' range. She got better as the melody got higher, but then had the thankless job of killing the momentum in the second act with her signature solo. I've read that this has always been a tricky character to show as sympathetic, as evinced by the brand new song inserted in the second act, "Maybe". Unfortunately, it's worse than the previous "Now That I've Seen Her" (which was much better than the original "It's Her Or Me Now"), and shares nothing in common with any of the other songs in the book. The writers might as well accept that no one will ever see Ellen as a sympathetic character and leave the original music in.

With these nitpicks aside, the rest of the primary cast was strong across the board:

Overall, the reimagining of Miss Saigon for the small stage at the Signature Theatre in Shirlington is successful, and no single flaw brings down the production. The more intimate sets, staging, and complete lack of helicopters, revolving stages, or flying chandeliers actually improves the show, allowing the leads to express themselves more subtly. When every member of the audience is less than 100 feet away, the need for overacting or big jazz hand motions is eliminated.

Final Grade: A-, definitely worth a watch before the end of its run (October 6)