I only played the original Bioshock for a few hours -- it had a great, creepy setting although it was starting to reach Doom 3 levels of darkness overuse by the time I lost interest. I recently picked up Bioshock Infinite for $10 in a Steam sale, based on its overwhelmingly positive reviews. 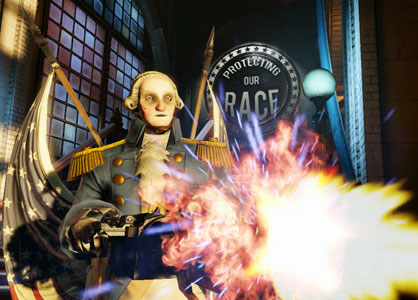 Once again, the setting and backstory are meticulously well-done. The story takes place in a floating cloud city in the early 1900s, and features a population living in a patriotic, almost cult-like society that has seceded from the US. Exploring the town for the little details is always rewarding, although a few zones are vast just for the sake of being vast.

At its heart, the game is a first-person shooter, but it also features an incredibly ambitious plot that succeeds more often than it fails. You're dropped into the action with very little explanation, but the plot eventually broadens into a finale as layered as the movie, Inception. There are a few gaps in the story, and sometimes the game goes the Half-Life route, requiring you to stand still to observe parts of the narrative -- a few times I missed plot points because I was already running away while my companion stopped out of earshot to talk about something.

Other than this annoyance, the companion that stays with you for most of the game is perfectly implemented. Unlike every single other game before this one, the companion is not annoying, helps you out occasionally by finding gear or money, can survive on her own, and never blocks you into a tight corner idiotically. Playing Skyrim as a fireball mage with a melee companion always ended in disaster.

The underlying shooter portion of the game is fun enough, and sufficiently holds together the more interesting parts of the package. There is a decent mix of old-style guns and "magic" abilities, although I ended up getting comfortable with a small subset early on and never needing to experiment with others later on. Controls are tight, and zipping around skylines throughout the town is a nice touch.

Overall, I had a fun time playing this game (it took about 13 hours), and appreciate the enormity of the story that the writers tried to tackle. I wasn't blown away by its resolution, but would definitely play this game again next year when I'm bored.

Final Grade: B+, enjoyable shooter with an ambitious plot and interesting setting