Early Saturday morning, around 0430, I heard scratching and squeaking sounds in the walls near our bed. It was not an illusion, as the cats were agitated as well, and it sounded sufficiently different from the ghost raccoons that visit on a very erratic schedule.

Because it is the job of the man of the house to investigate strange noises and stab burglars, I cracked the window and peered into the early dawn to see if any errant Cirque du Soleil performers were maliciously climbing the drainpipe. (Meanwhile, Rebecca thought I had opened the window to fart without bothering her, which shows her interpreation of man of the house duties). 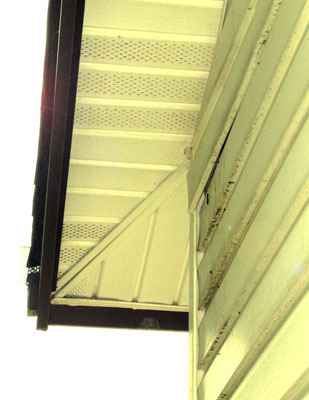 I immediately saw several bats fly past the window, highlighted against the sky, and closed the window before any came inside. Later on, in the brightness of daylight, I could easily see where a piece of siding had come loose, providing refuge for a family of what sounded like at least 5 bats. Bat habitats (or "babitats") are kind of like halfway houses for recently released criminals: they're necessary and beneficial for society, but no one wants to live next door to one.

The Reston area around my place of work lost power again on Monday (the second time this month). Rather than sit at a desk listening to the dubstep beats of multiple battery backup systems beeping underneath desks, I decided to take the afternoon and deal with the bats.

I started by scouting the perimeter of the house, looking for additional points of egress. Luckily, the bat activity was localized to a single corner, where the guano streaked down the wall like so much majestic diarrhea. Next, I went up into the attic to check for infestation, and immediately lost ten pounds through sweating in the 130 degree heat. Thankfully, the bats had not migrated into the attic space, and it looked like they were still limited to the area outside of the house, between the siding and the walls.

I first attempted to scare the bats out with various drumline rhythms on the inner walls, but the family seemed strangely immune to marching bands. Next, I used the garden hose to shoot short, directed bursts of water under the broken siding, and was immediately rewarded by the flight of a single bat. Then a second, and a third. By the time it was over, thirteen bats had flown out of the siding and into the nearby forest, not unlike a Sesame Street counting exercise. A fourteenth escaped when I went up to wash down the siding and seal up the holes.

After peering into the recessed woodwork for more bats, and half expecting for one to fly at my eyeball and knock me off the ladder, I deemed the crevice empty, and temporarily secured the siding in place with duct tape. Our bat problems were over. 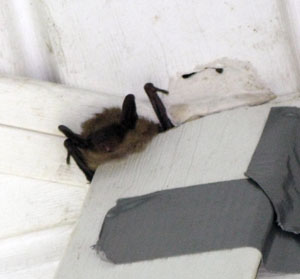