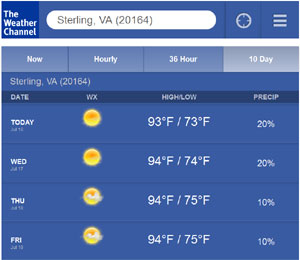 According to the weather forecast, we are now entering the annual week where the intensity of the heat and humid swirl together like a melted morass of soft-serve, indiscriminately killing urban old people and providing everyone else a guilt-free reason to stay indoors in front of the computer. Since I regularly spend all of my time there anyhow, this week won't be much different than any other week, although the leather seats in my Accord increase the likelihood of "sweat-back" on any given commute.

Incidentally, the Weather Channel website is 550% less annoying if you visit the mobile version (m.weather.com) rather than the regular version (www.weather.com). The parts of the forecast that one might actually care about are highlighted, while the autoplaying videos and social media entreaties to "see what your friends think about the weather" are eliminated like married people with children in San Francisco.

In the history of BU, I can only recall two times where I was ever vanquished by Virginia heat -- normally I go willingly into the darkness without a fight, watching DVDs with the sound turned up high enough to hear over the A/C:


You are currently viewing a single post from the annals of URI! Zone history. The entire URI! Zone is © 1996 - 2022 by Brian Uri!. Please see the About page for further information.