March 27, 2001 was a Tuesday in my final semester at Virginia Tech, a semester with a grueling 13-credit courseload that accurately reflected my public school abilities. With an 8 AM math class which I reguarly missed by virtue that it was at 8 AM, in a different room 33% of the time, and had no parking spaces within a one mile radius, my days mainly consisted of dicking around with music. That being said, March 27 was one of busiest days of the semester. 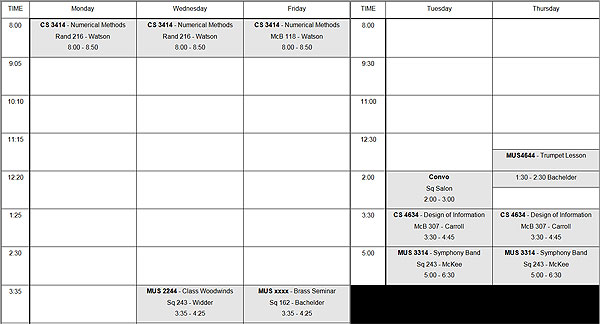 This particular Tuesday opened with a private lesson at 11:00, in which Dave McKee gave me conducting tips for my recital, followed by a fettucini alfredo lunch at Shultz Dining Hall. I spent the next hour at the music major couches where Liz was introducing her friend, Katherine, who was transferring into the music department, if I recall correctly.

I took to the loading dock at 1:30 PM (this was in the years before I used military time) and annoyed random passerby by warming up for my Convocation performance. At 2:00 PM, I played the third movement of the Ewazen trumpet sonata, which is the musical equivalent of a Ritalin withdrawal, and then turned pages for the accompanists during the rest of the performances.


After Convo, I could have attended my useless Design of Information class, where we learned that "converging lines on a sign will draw the eye to the convergence point", but wisely chose to head to River Mill for fries and darts with Jason, Rosie, and Anna instead.

I ended up skipping Symphony Band that day as well, but for a legitimate reason: I was the official page-turner on Shac and Nikki's junior recital and had to turn pages on their dress rehearsal. I also arranged their final piece, Amazing Grace, which continued to prove that you never want brass instruments playing at the same time as sopranos. I was also the poster designer for this musical rave, and to this day, cannot believe that they chose the staid poster on the left over the cheerful poster on the right. 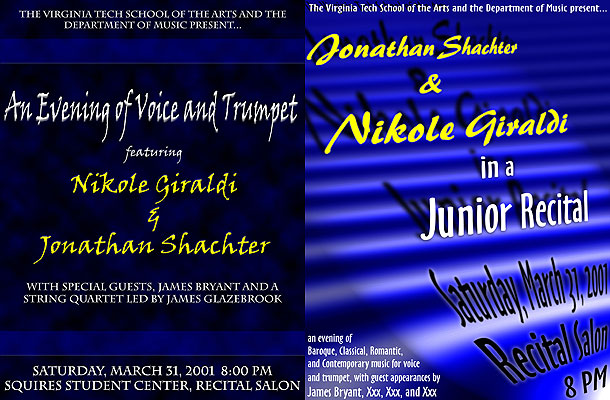 I came home to the apartment I shared with Rosie and Anna for a dinner (probably one of those 75 cent bags of Lipton noodles) and then drove Anna back to campus around 9:30. Apparently she had found her way onto some intramural softball team with the music department. I closed out the night with my habitual late night trumpet hour, because when you practice late at night, you can use all of the big rehearsal rooms, and the echoes cover up how awful your tone quality is. While leaving the practice area, I bumped into Nikki, and got us some late night ice cream from the Baskin Robbins off Main Street.

I was in bed by midnight, because I had a lot of sleep to catch up on if I was to be successful at skipping my Wednesday 8 AM class.