Metro Silver Line likely to get a $5 million haircut 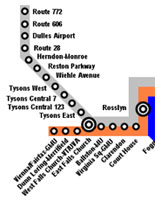 Metro's new Silver Line could suffer nearly $5 million in cuts in federal funding. The money comes from the Federal Transit Administration's roughly $2 billion program called New Starts, which could take at least a 5 percent across-the-board haircut because of the federal sequestration.

Chris Paolino, a spokesman for the Metropolitan Washington Airports Authority (MWAA), said the agency "hasn't heard anything so we don't know what's going to happen" in terms of its fiscal 2013 funding from New Starts.

When asked why the Washington Post had written what is essentially a non-story with no tangible information, reporters noted that stories about the Metro always bring an increase of traffic to the Post website, as conspiracy theorists from both ends of the political spectrum blame the other side for overbudgeting. Said one reporter, "We earned about twelve cents in advertising from those commenters. Coupled with the firing of our ombusdman, this means that your print subscriptions will only go up by ten dollars this year. We can also hire more reporters who think it is clever to compare budget cuts and haircuts."

Already, the first phase of the Silver Line is overbudget. It has $77 million left in a $162 million contingency fund, according to Pat Nowakowsi, the lead overseer for MWAA on the project. The cuts come after the Federal Transit Administration said it has tried to streamline the funding process for the New Starts program, which funds heavy rail and light rail projects, along with plans to add bus rapid transit lanes across the country.

The New Starts program has also faced criticism from balloon enthusiasts who feel that their "lighter-than-air" rail ideas are getting ignored, and pragmatists who don't believe that "bus" and "rapid" can ever truthfully belong in the same phrase.

FTA's administrator Peter Rogoff told attendees last week at a transportation conference that the cuts will mean "higher borrowing costs that will make these things more expensive for the taxpayer." New funding agreements, he said, "that could be on the horizon could be in danger."

The FTA is currently in talks with Christopher Nolan on a sequel to Inception where things that might exist in the future might not exist in the future. Mr. Rogoff also stated that hurricanes that could happen next year could also not happen, although the National Weather Service, facing sequestration woes of its own, could not confirm or could deny this assertion.

Independent analysis by the URI! Zone has identified several potential areas where $5 million might be saved at this stage in the project:


You are currently viewing a single post from the annals of URI! Zone history. The entire URI! Zone is © 1996 - 2022 by Brian Uri!. Please see the About page for further information.