This photo was taken in 1984 in our backyard. The tree in the background was the backdrop for a large percentage of pictures, probably because of contrast, pattern uniformity, and other thing a photographer used to have to care about before Photoshop. 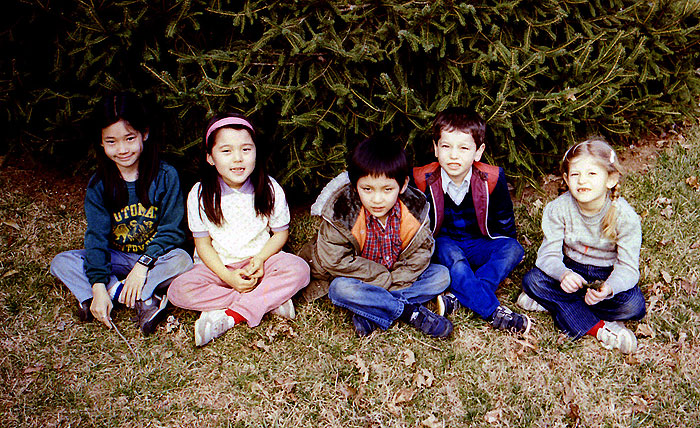 On the far left is my sister at age 8. Next is Gina, my kindergarten girlfriend, me at age 5 in Kangaroos and my sister's hand-me-down jacket, my kindergarten best friend, Yunus, and his sister, whose name I don't recall.

Having skipped preschool, kindergarten was my first structured school experience. I went to William Ramsey Elementary because it was the closest school to our babysitter, Rosa. My Dad would drop us off there really early in the morning, and then Rosa would make us sleep for another hour before getting us ready for school. In the afternoon, we would run with the neighbourhood kids of North Armistead Street (in the days when it was only half of a ghetto) until my Dad picked us up.

After kindergarten, I moved to James K. Polk for the remainder of my elementary school career. Yunus moved back to Turkey and I never saw Gina again either. My sister, however, stuck around for another ten years.