If you had to choose only one video game (either console or PC) to play the rest of your life, what would it be and why? - Katie Lucas

I would want a game without much of a start or finish, like a game from this list of mindless addictions. If I could find a way to play it again without getting migraines, I would pick Minecraft. Second choice would probably be Doom 2. If my pick ever got too boring, I would go over to your house and play your obvious pick, Donkey Konga.

Why do you like the color blue so much? Oh wait, I just read about eye physiology - is it because of your color blindness? How many (out of 3) of your cones work? And which ones? - B

Because of my red-green colorblindness, blue is the only part of the spectrum where I have complete confidence in what I'm seeing. I once painted some leaves in Art I in tenth grade, and the teacher asked why all the leaves were dead. She then had to mix the colors for leaves for all future nature pictures. I don't know anything about the cones, so I'm going to posit that my snow and sugar cones are working, but my waffles are effed.

Here is a post I wrote ten years ago about how I see those weird colorblind test charts. Below is a picture of what I see when I watch the Muppet Show. 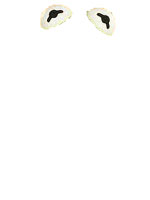 If you were asked to design a new Monopoly token, what would it be? - Mom

The requirements of a good token are:

Therefore, it is scientifically accurate to say that the best token would be a giraffe with a really long neck that has just finished drinking out of the watering pool, so its legs are still splayed about but its head is up in the air.

What would be your ideal super power (individual power, "omniscient all-powerful godly superman multi abilities" does not count as one)? - Evil Mike

Do you ever harbor escapism fantasies and, if so, where do you think you might like to escape to? - Chompy (the dog)

I'm happy where I am. Were I to escape, it would be somewhere beachy where physical isolation is counterbalanced by online connections. Which brings us to...

if you won the lottery and got to take home $75M after taxes, how would you spend it? - Doobie

We actually had a discussion similar to this at Eggspectation a few months back. First, I would put together a studio orchestra and record all of my compositions -- musicians these days work for pennies on the dollar. Next, I would move to Hawaii and support a beach bum lifestyle where my highest monthly expenditure would be the highest speed Internet service possible. After twenty years, I would still have about $70 million left, which I would donate to worthy and not-so-worthy causes with the caveat that I get to dictate exactly how the money is spent. For example, renovating the turf in the UVA stadium but stamping VT all over it, or forcing people to compete in a reality show for scholarship money. When I died, none of my future kids would get more than $100,000 each because people born into money are usually lame.