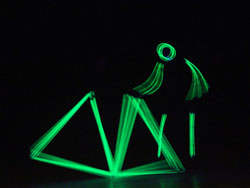 In lieu of the usual holiday party at a local hotel bar, my company did something a little different on Saturday night, apparently stressed out that they would have to top the awesome Air and Space Museum gala they held last summer. The evening's entertainment was "Luma Theater" at the Strathmore in Bethesda, with our free tickets normally running over $30.

The show was disappointing, starting from the forty minutes we sat on the road outside the venue while Obama's motorcade departed from the previous event, denying us the mingling and libation time that would have greatly improved the Luma portion of the evening. After arriving in our free seats at the back of the theater, we became inured to a two hour show involving people dressed in black, juggling with flashlights.

Were I visiting Busch Gardens on a sweltering summer day, I might step into a cool, air-conditioned building for temporary relief, and something like Luma might be a show I would enjoy seeing for all of ten minutes before returning to the queues for the Big, Bad Wolf. However, it never creeps beyond the "Well, that's nice" phase and certainly doesn't succeed as the main attraction. Rebecca's initial hopes that it would be kind of like Cirque du Soleil were irrevocably dashed.

Really, there's only so many minutes you can watch people dancing around wearing glow-sticks before you realize that the only gimmick is the absence of overhead lights, a phenomenon that occurs nightly in the natural world. It wasn't even very skillful -- the Luma Theater of Light had not claimed elemental mastery over Sound, and we heard the telltale clattering of juggling pins dropping to the floor on four separate occasions in a single skit. Performers were not quite in sync while dancing to popular tracks from Caribbean Tunes (with Ocean Sounds), and after the part where they asked everyone to pull out their cellphones to add to the light, most of the audience kept them out to check email for the rest of the show. A five minute monologue listing the different kinds of lights was reminiscent of Bubba Gump's shrimp.

By the time intermission came around, we had been watching for thirty minutes too long, with another forty-five minute section after the break. The high point of the show was when it ended and they threw beach balls into the audience, but even MUSE did that better at the Patriot Center.

As the performance was wending its way into overkill, I came up with some alternate titles that might have been better than "Theater of Light":

Final Grade: D. Skip it unless you can get in for free, or they incorporate my idea about pumas (Creative Commons Attribution licensed).