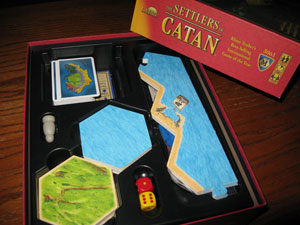 Rebecca and I enjoy playing Settlers of Catan in spite of its ten hour setup time. The problem with this game is that it's really geared for four players. With just two, the pace is sluggish and there isn't much interaction between players, but whenever you have four, you never get to play the original game because everyone shows up with all of the expansion packs that let you ride dolphins or what have you.

To increase our enjoyment of the two-player version, we have invented and refined this variant on the standard gameplay. The changes make two-player games much more interesting and competitive, while still being close enough to real thing so you can remember how to play with the real rules when you go to your regional Settlers championships.

By playing with these rules, we've found that we're more likely to build near each other or compete for road space, and we're not consistently overloaded with sheep. Enjoy!