It snowed all weekend long in Sterling, but the total accumulation still ended up being zero -- a level of payoff not experienced since I last watched the complete LOST series. In between the flurries, I put in some voluntary overtime, getting a particularly persnickety project building on a continuous integration server and writing data access objects.

I also hit Costco on Saturday morning to secure a box of bacon-wrapped beef tenderloins with Gorgonzola cheese. In the afternoon, I fixed a rattling damper vent in the depths of my ducts, using only a piece of carpet stapled to a leftover piece of molding and my dad's snake-like spy camera. 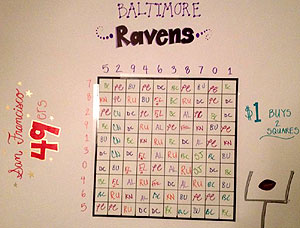 For dinner on Saturday night, we tried something new: the Euro Bistro in Herndon. An Asian-owned restaurant selling German and Austrian food would seem out of place in any other city, but the food was actually quite good, if a little pricey. (Once a restaurant's entree prices start tickling the dank underbelly of $20, they fall into the "special occasions" bucket). It was also surprisingly packed at 8:30 PM and featured an accordion player.

On Sunday, I developed some Spring controllers and started a new Borderlands 2 character for the heck of it. In the evening, we baked our box of bacon-and-cheese-encased beef and headed to a Super Bowl party at the Crane's. We did not win any money in the Final Digit Bingo game, although we managed to crack open our final roll of year 2000 Sacagawea dollars (of 4 rolls gifted by my parents at 2000 Christmastime) to use as bet money. It should only take another five years to use up the remainder, since "legal tender" doesn't necessarily mean that "people like accepting them".