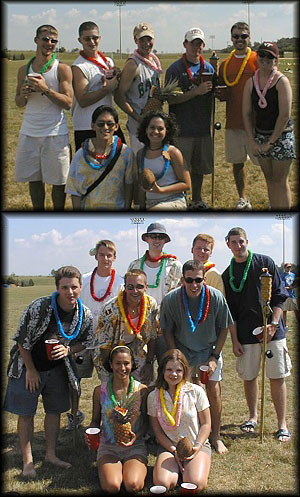 August 22, 1999 was the Sunday before the first day of classes in my fourth year at Virginia Tech. I had just finished a week of band camp and had moved into East Ambler Johnston with Kelley Corbett and his eight hundred towels. I had a 19 credit schedule lined up that included Physics, Intro to Human-Computer Interaction, Conducting, Counterpoint, Trumpet lessons, Composition lessons, Flute lessons, and Marching Band.

The pictures on the right were taken at the End-of-Band-Camp festivities with a brand new 2 megapixel camera. You can also date the images by the classy shadow-bevel effect, which meant that I was still using Paint Shop Pro for all of my graphics needs.

Sunday the 22nd opened at a band fraternity party (Kappa Kappa Psi). As section leaders, Pat Brown and I had decided to get as many freshman trumpet players involved socially as possible. Although most parties cover their expenses by selling cups, this particular one was ticket-based, which meant that we could get the whole trumpet section in for the price of one ticket and the time it took to photocopy it sixty-three times.

I was also taking freshmen under my wing by giving them rides to and from the party, and on this particular day, I took a little freshman girl named Anna Spellerberg home from the KKP party (pictured, above right with the pineapple). As everyone who knows her today can attest, Anna is very shy. I was only able to glean a few details of her life during the 10 minute car ride home, namely that she had a boyfriend back home named Ben who she met at her neighbourhood pool and who was coming down to visit in a couple weekends, she wanted to major in something wildlife-related so she could be outside all of the time and liked animals like her dog, Kelsey, she was the third of five sisters, she was worried about getting cut from band because she went to a private school called O'Connell with a really weak band program, she lived in the "Wellness Hall" where alcohol was frowned upon but not because she didn't like alcohol, but it was just that she didn't want it around where she lived, and she wasn't sure about her new roommate yet.

East AJ welcomed everyone back to campus with an 8 AM fire alarm that Sunday, but it didn't bother me since college-me was prone to doing things like waking up at 6 AM to do laundry without fighting over the machines. For lunch that day, I went to Owens with Nikki Giraldi, Shac, and Shac's new roommate, Brian, who didn't say a single word the entire time.

After a brief stop to say hi to a new freshman, Andrea, that went to my high school, the rest of the day was consumed with band, band, and band. We played at something called a "VT spirit rally", and the fact that I remember nothing about it means that it was probably a horrible idea that we never tried ever again.