August 15, 2001 marked the formal severance of my Virginia residency, an act of abandonment that would allow me to get in-state tuition rates a year later at Florida State. At the time, I had no idea how much I would end up keeping in touch with college friends, and didn't know if we would just naturally scatter to the winds like dandelion tufts bound together by nothing more than proximity and Killian's. It was for this reason that I originally started a blog, and you can see from the relative innocence of those early "this is what I ate for lunch" posts that I really had no particular goal in mind. 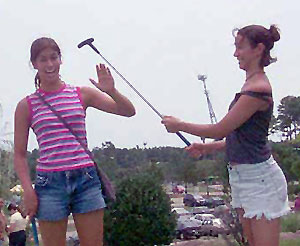 Before this trip, I had only been to Tallahassee once, with my dad, to lease an apartment and figure out where things were situated. My plan for this trip was to take the Auto Train from Lorton to Sanford, FL, converting a 13 hour drive into a 4 hour drive (plus 18 hours on a train). This is evidence that perhaps Virginia Tech was mistaken in giving me a math minor.

Anna and her sister, Emily, came out to say goodbye in my final hours as an Alexandria resident, after which I drove a 2001 Honda Accord, swollen with music textbooks and computer gear, to the Lorton train station.

Riding the train was a pleasant experience, although I spent very little time enjoying the scenery. I was engrossed in several boring remedial textbooks, hoping to augment my mediocre VT music education enough to pass all of the scary FSU entrance exams. I did not yet realize that the threshold for passing these exams was more of a speed hump than an Olympic hurdle.

The main things I remember about Florida highways were the 80 MPH speed limit (which was never enforced until 90) and the sudden monsoons that reduced visibility to 0 before vanishing completely. After an uneventful drive across the part of the state that isn't the panhandle, I arrived at my cinderblock Parkwood apartment and settled in, ready to begin the Florida chapter of life, full of Totino's pizzas, Jim Barry, and Ginger (the dog)!