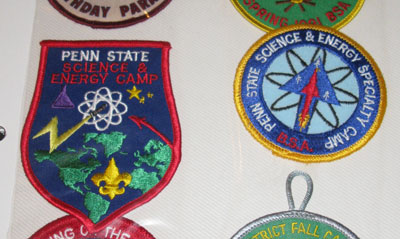 August 8, 1994 was a Monday, and the second day of Penn State Science and Energy Camp, which was held at Boy Scout Camp Goshen. By now, I was already an Eagle Scout and had no further need of merit badges, but this camp allowed me to earn five more badges whose requirements were too annoying to do on my own. There are three approaches to earning a merit badge in Boy Scouts:

The badges offered at this camp were too boring to earn through method #1 and impossible to earn through method #2 without a physicist in the family. This made the cost-benefit of method #3 very strong, because there is no better way to learn about Atomic Energy, Chemistry, Energy, Electricity, and Space Exploration than at an outdoor camp with no hot water and minimal electricity. As an example, in order to earn my Space Exploration merit badge, I had to assemble a model rocket, paint it, and launch it on the final day.

I attended this camp with two other scouts from my troop, Chris Anderson and Tom Campbell. We arrived on Sunday evening and were placed in a campsite with seven other scouts, according to old journals: Mike B (a strong, little black kid), Randy (a big guy who was kind of stupid), Steven (a short little nerd who got on everyone's nerves and shared a tent with Randy, who nearly beat him up a few times), James (a guy on the Robinson crew team), Mike T (evidently unremarkable since I didn't write anything about him), and finally, David and Ian, two older scouts that were paid $75 for the week to keep an eye on us. There were 43 scouts spread across 4 campsites in search of the "easy A", including a 250-pound guy named Serena (who asked us to call him Sir instead) and a guy who was an exact lookalike for Screech, from Saved By The Bell, who we obviously called Screech.

Monday was the first day of classes and we quickly realized that the sessions were going to be ridiculously boring, consisting of old VHS movies, reading assignments, and minimal (outdoor) lab activities. By the end of the day, we had so much pent up energy that we all met up in the nature area (a seemingly irrelevant name to assign to a clearing when you're in the woods) to play a game of "Manhunt". The game had barely been going on for five minutes when someone leaned against a wooden flagpole and it fell on Ian. The camp director kicked us out moments later.

As punishment for the falling flagpole, we had to do aimless tasks to clean up the nature area, like digging holes to fill them in again, or piling up sticks and then returning them to the foliage. Later, the camp director yelled at us for breaking a tree in our campsite, even though the tree had always been broken. This is when we all earned our Recidivism merit badge.

In fact, I barely wrote a thing about the merit badge classes once they got started. I passed all of the quizzes on Friday and won an "Outstanding Energy Guy" award which gave me a patch, a shirt, and a hat. I spent the rest of the time loaning books to Ian to keep him distracted from burning all of my matches.