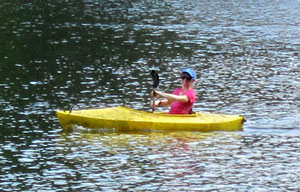 This past weekend was one of the busiest of the year, starting with a Friday night showing of Stick It, which I was reminded of while researching Friday's post and thought that Rebecca would get a kick out of, now that the Olympics have ended.

On Saturday morning, we went to Rebecca's parents' house and did some kayaking on Lake Barcroft. The outing was nicely aligned with the first hot-cool day of the summer, where it didn't feel agonizing to be outside in the humidity (since Virginia is the armpit of the East Coast during the summer). In the evening, we had a Persian dinner at the home of one of Rebecca's PT classmates in yuppy-Sterling. 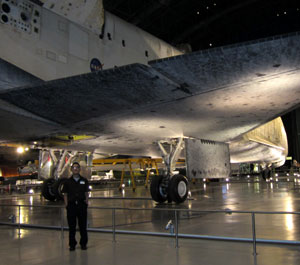 On Sunday, we had our first ever trip to the local bowling alley (with our across-the-street neighbours) for a bowling special of 3 games (plus shoes) for $10. I hadn't been bowling in at least six years, and managed to reach a top score of only 124. Out of 300, this is a 41%, and thus, would be passing in public school.

In between rainstorms, we ducked out for our first ever visit to the Udvar-Hazy Air and Space Museum Annex, whose name sounds more like an ice cream flavor than a Smithsonian institution. It was my first trip, since I am philosophically against museums that bill themselves as "free" but then charge $15 for parking. The occasion was a meet-and-greet party for FGM and the company it is merging with.

We ate free sushi, saw an overwhelmingly underwhelming IMAX movie about the history of flight which opened with the statement "As the twentieth century comes to a close...", and rode in an interactive flight simulator. Rebecca was the pilot, and got stuck in a neverending barrel roll, and I was the gunner, a tacked on position that's about as useful as being Player 2 in Super Mario Galaxy.

Mixed throughout these events was time enough to start new seasons of Dexter and Community.