It was yesterday morning when I was making a legal right turn on red (with no pedestrians present) that I was furiously honked at by a driver in a bright red Mustang. He was driving in the far lane of the two-lane road (Beauregard Street) I had turned onto, and was apparently so agitated that I had come within five and a half feet of marring his finish that he had a musical seizure, belting out some sort of angry Morse code on his horn for the next fifty yards. Evidently, he worked just a few blocks up the road, and as he pulled into his turn lane, he held some sort of law enforcement badge out his window (mounted on a square of black felt that was obviously too big for wallet-size) and gave me his best glare. 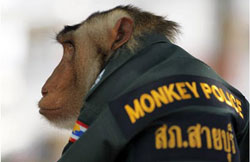 I assume that I was supposed to be intimidated by the consequences of driving responsibly next to someone who wasn't a cop but had a badge like one, but his playing of the badge card just made the whole scenario comical. This is probably the only situation in life where it would actually be fun to own a trained monkey, because the threat of being covered in poop or having a baby eaten would be greatly outweighed by the hilarity of getting it to snatch the badge as I drove past (although "drive-by snatch" is another concept that probably sounds better on paper). Afterwards, I could film an FX serial about a monkey that solves crimes.

The reason I was on Beauregard Street yesterday was for my first conference experience in my new role, held at the Hilton Mark Center just upstairs from the American Scientific Glassblowers Society symposium. It was kind of on the small side from my expectations, with about 55 attendees, and the presentations were generally pitched to a management level rather than a technical one -- in the last presentation of the day, the speaker skipped over a slide full of small print with a dismissive "oh, this slide's too technical".

Still, the material being presented was good, even if three of the eight speakers (including the keynote) were last minute replacements -- it connected the dots between my old role and my new one while constantly referencing the Object Management Group (OMG!) and supporting a game of word bingo with phrases like "policy", "swim lanes" and "Federal, State, Local, Tribal".

I also bumped into a guy I went to high school with, who happened to be one of the prime speakers, and whose CV shows that he's done more in the last two months than I have in my entire life. He was the one sweeping the high school science fairs with cures for cancer and rapidly incrementing atomic numbers while everyone else was making volcanoes and plugging things into potatoes.

The conference was well catered, from the breakfast burritos to the steak and salmon entrees served at awkward circular tables where complete strangers played the D.C. game of "So what do you do?" until common ground for conversation could be found. It adjourned at 3 PM with ice cream sandwiches, in plenty of time to flee the city before those pesky HOV restrictions went into effect.

Austin hotel shuts down as more glass falls to the street