Instead of composing a Museday and improving the world of serious music with 30 seconds of music that doesn't sound like fornicating porcupines, I got caught up in playing the alpha version of

and looked up four hours later.

Minecraft is an open-world, indie, sandbox game which is essentially a "digging holes at the beach" simulator. Dig in the dirt or attack a tree to gather supplies like wood and rocks, and then craft them into tools like picks and shovels to mine in the mountains. Each block you mine can then be placed, Lego-style, anywhere on the (infinitely generated) world. Craft a sword and attack a cow to get leather, then craft some armor. Combine coal and sticks together to make torches, which keep the zombies from spawning too close to you at night. 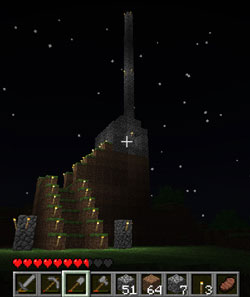 This might sound boring as hell, and it probably is, but addicting gameplay is not held back by such mundane considerations. When you're mining out your little cave and stumble across a vein of gold ore, it's decidedly fun. (It's not quite as fun when you kill an exploding zombie too close to your masterpiece though, as a big chunk of your staircase will probably blow up with him, especially if you cut corners, little pig style, and built it out of dirt).

The fruit of my four hours is shown on the left. It started out as a stone house on a giant hill, but I strip mined it, West Virginia style, both to make it harder for spiders to climb in the windows and attack me, and to gain more resources to build stone shovels. There are a ton of advanced crafting

you can stumble upon, such as elevators and pressure plates, but the farthest I got last night was crafting a stove to cook the bacon from the piggy I killed (bacon restores health, real-life style, which is useful when a zombie attacks or you fall off your scaffolding while building your steeple).

Some of the OCD Minecraft creations on Youtube (such as a complete scale rendition of the U.S.S. Enterprise) are insane, and there are plenty of helpful tutorials to get you started too. The graphics are atrocious -- I've pooped better textures than these (granted, only in a monochrome palette), and it would be a much more user-friendly game if the various icons had tooltips, but neither of these issues gets in the way of the fun.

Final Grade: B+, If you like building things, the $13 price tag will give you at least that much fun.