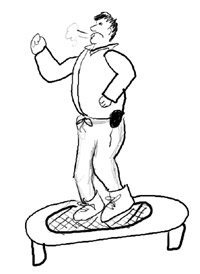 ♠ As part of a drive to improve company morale (and to inure us to the day when the RFID chips are implanted in our armpits), everyone in the company is wearing a pedometer for a month. The competition started while I was at the beach, so I'm already about a week behind, but it is interesting to learn that my stride is two feet eight inches (taller than some piccolo players) and that I average 1.5 miles a day even when I'm not doing anything (once labeled by Tammy Hale as "the purposeful Uri stride"). It's an interesting diversion, but I do not love the device so I am not a pedophile.

♠ Based on the braggy CC: ALL email from the guy who's averaging 6 miles a day, I may never win the race to get fit, but I'll be at the front of the line in the race to get fat. Give me a call when there are bacon-meters that you can hook up to your esophagus.

♠ I am also transforming my crazy distance skills into two more trips for the month of October -- one to New Hampshire to help Mike (of Mike and Chompy) get acclimated to his walker on the occasion of his 31st birthday, and one to Blacksburg to visit the new nephew. The latter visit coincidentally coincides with three separate marching band events: MV Alumni Day, Band Parents' Day, and something called "Band-A-Rama" which foreshadows disaster -- nothing good ever happens when you put "Rama" on the end of words. 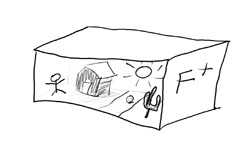 ♠ For example, consider the word, diorama, which plants the seed of unpleasant, runny feces in your brain before germinating into the safer, less edgy, cardboard box filled with Scotch tape and poorly drawn stick figures that only gets an A when your parents do it for you. 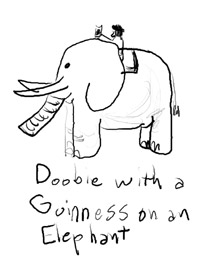 ♠ Speaking of the poorly drawn, I mixed in some extra effort in today's fragments column by bringing back the hand-drawn illustrations that thrilled one or more readers in January. This is to make up for last weeks' fragments column which only had 4 fragments, an act of exaggeration that might better be titled, Friday Fraudulence.

♠ There are no amazing plans scheduled for this weekend, but it'll be good to have some downtime before an already busy October. I may go to Costco and get some more of this delicious frozen grilled salmon that's even easier to make than spaghetti.

Aliens are on to our nukes

Robbers nabbed trying to drill into bank from above