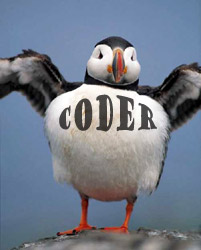 ♠ After six and a half years of a Pentium 2, I finally got a new computer at work that zooms along at the speed of speed. "puffin" will now be the birthplace of amazing coding miracles, and "llama" will be relegated to the pile of useless machines that ultimately turn into webservers because they can't handle anything more complex.

♠ There are only two problems with the new computer -- it's running Vista, and it has no AGP slots for my World-of-Warcraft-era graphics card. How am I supposed to get any raiding done at only 12 frames per second? Then again, that's a phenomenal speed for someone who makes eyeglasses.

♠ In Virginia, you can't buy new glasses without a prescription that's less than a year old, so every time I get new glasses, I stock up on 2 - 3 pairs. While looking through my cupboard last week, I discovered that I now have 5 pairs of glasses with slightly varying prescriptions that are all in perfect condition. With the proper care, I could probably make it to my dotage and never need to return to the optometrist. Of course, the easier solution is to just keep wiping them on my pants until they get scratched up like an emo lottery ticket.

♠ I have never bought a single lotto ticket, but we were allowed to scratch one of our grandparent's tickets every week in Michigan. My net winnings came out to $5 and a free ticket. I had much better luck with the Monopoly McDonald's game -- I was a pro at getting the grand prize "free small drink".

♠ This weekend is the first of my Thanksgivings, featuring a supporting cast of work folks and their kids. I also may do some raking and watching of the first season of Dollhouse, which is good so far despite the retarded introductory sequence.

Man accidentally ejects himself from plane