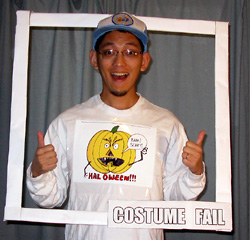 This weekend was a mix of work and play, which sadly did not include any volcanic sand beaches or hikes through the jungle. On Friday evening, we went to a Halloween party in Gainesville at Mike & Beth's house. I attended as "Costume Fail" since I like costumes that take as little effort as possible. This new costume worked out, although I had to spend a lot of time intefering with other people's navigation in my frame (much like any website from 1998).

At this particular party, there were victims of domestic abuse, Mr. and Mrs. Darcy from Pride and Prejudice, a custom-made Double-Dare uniform, as well as The Money You Could Save with GEICO, among many others. 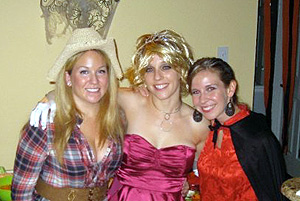 On Saturday, I put in a few hours working on session timeout issues and then downloaded a new game, Torchlight, which so far has been a great $20 Diablo-clone with all the annoying parts taken out.

In the evening, Rebecca came home from work and we discovered that party #2 had been cancelled, so we went straight to Party #3 in McLean. I reused my Holiday Box costume so I wouldn't keep bumping into things and ate several hundred wings. We also came in 2nd in a Halloween trivia contest and saw a puppy dressed up as a pumpkin.

Sunday was a rather slow day, during which I spent most of the day resetting the half of the clocks that didn't automatically update. We closed the weekend out with some tasty burgers at Red Robin and an episode of Burn Notice.

Arnold tells the legislature where to go