What was intended to be a four-day weekend for me, actually turned into something closer to a two and a half day weekend. On Thanksgiving Day, we went to the home of those I now call "in-laws", accompanied by a nine-pound turkey and two packets of instant mashed potatoes. Our plan for Friday was to stay home and do nothing, but this was aborted when a server at work went down (not unlike a slutty edition of Applebee's). I spent the rest of the evening dealing with that, although the day was partially saved by having Velveeta Shells and Cheese for dinner and getting Rebecca hooked on The 4400.

Saturday was a home-y day, during which we bought two lamps for the living room and learned that no stores in the area carry kitchen curtains that aren't blazingly ugly. There were fewer people out shopping than I expected, and we were in and out in a couple hours. In the evening, we attended the post-wedding party of some of Rebecca's work friends (who had gotten married in the Dominican Republic), with sushi, shrimp, and dinner catering provided by Maggiano's. 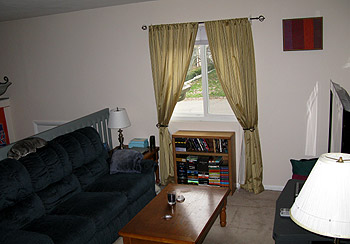 To close out the weekend, we created a productivity limit function on Sunday, starting high with raking, car cleaning, and thank you notes in the morning, and gradually approaching infinite laziness with TV and pizza and waffle fries in the evening.

We also rearranged the living room at some point, but I cannot recall the day that we did that, so I'm blaming it on elves or Booty.

Invading camels to be shot

Caged cavemen to go on display at Warsaw Zoo