teetering on the edge of the sphere 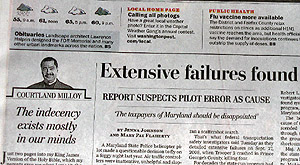 ♠ I don't really care for the new format and typeface of the Washington Post. It's as if people living in an Arial world suddenly rediscovered Times New Roman and thought it was a great idea, despite the past examples of New Coke and the original Roman Empire. Now it just feels like I'm reading a very liberal edition of USA Today with a harder crossword puzzle.

♠ When I was pretending to be a doctoral student at Florida State, we would gather for lunch at The Loop where my lunch would consist of the $2 side of fries and we'd tackle the USA Today crossword puzzle as a group. This got me into a daily crossword puzzle habit that ran from 2001 to the middle of 2004 (or right when I got moved to a project at work with tangible things to work on).

♠ My very first project as a full-time employee involved babysitting a consultant for days at a time while he tried to convince us that a content management system for posting news stories on an intranet was a good fit for managing all the documents in the Department of Defense. He would fly in on a Monday, write barely working code on Tuesday, and fly out on Wednesday. Thursday and Friday consisted of us trying to make his code work. 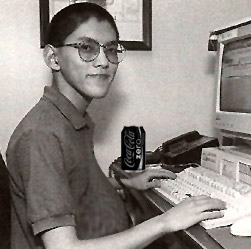 ♠ Speaking of work, they stock Coke Zero in the free soda fridge at work now, although this might have been a fluke, since I drank it all this week and it hasn't been restocked yet. Still, three Coke Zero's a day is far healthier than my internship -- remember when I was drinking a 7-UP every hour?

♠ I didn't originally plan to have all my images be black and white this morning, but an occasional palette cleansing is highly recommended. Try the ginger.

♠ Plans for the weekend include three Halloween parties in two days, spaced over forty miles and in a straight line, such that when you draw a line between them all, you get a straight line. This year's costume is better than 2008's Ugly Betty, but not as good as 2007's Very Special Kwanzaa Box, so I may decide to whip out my box for old times' sake at one of the parties. I also plan on coming up with a delicacy to replace cheese soup that's easier to make and fits in better with a Thanskgiving dinner while Rebecca hops off to Front Royal for some kind of candle party (Colonel Mustard did it).