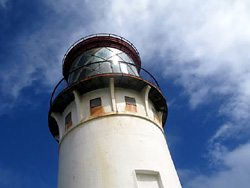 To the seven remaining visitors who chose to stick with the site through three weeks of me going all Pictures Pages on you, welcome back! I've been home since Tuesday the 20th, catching up on all the news and cheezburger content I missed while in Hawaii, and unpacking a slew of kitchen-related wedding presents that I plan to use in a Rube-Goldbergesque machine that will toast English muffins when my alarm goes off in the morning.

The honeymoon was very relaxing, although jet lag made me sleep 14 hours the first night and then 2 hours the second night back. Because people hate when I do a miniseries, I won't be writing a consecutive travelogue of Kauai this month -- instead, I'll intersperse Memory Days with occasional Hawaii Days and tell bits and pieces of our trip throughout the rest of the year.

Now that my life as a wedding planner is over, I have a laundry list of things I want to accomplish over the coming months (most of which I will still lack the ambition to get done, but writing them down counts as "trying"). "Month of Thanksgivings" is just around the corner, but I'll probably scale it back this year since eating leftover turkey for four straight weeks is not as fun as it originally seemed. "Anna's Halloween Party at My House" is also cancelled this year, but I'll try to come up with a fun costume for other area parties (while reusing the classics for parties with people I've never met before).

So what did you do while I was gone?

Farmer's daughter disarms terrorist and shoots him dead with AK47