Hawaii Honeymoon, Part I of V 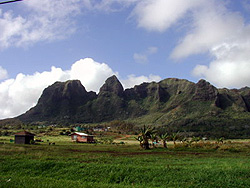 If you haven't been paying close attention so far, I got married three weeks ago and fled to Kauai, an island paradise which is the farthest western public island in Hawaii. My oceanic travels are exceedingly limited, comprised of my Fresh Off the Plane trip from South Korea, and a 2008 trip to big cities in Europe. We chose Kauai because the Caribbean was in hurricane season, and there seemed to be enough varied activities to last us for the two weeks we wanted to spend. The fact that I didn't have to fill out any forms at work for leaving the country to face the dangers of converting to Communism was just icing on the wedding cake (exquisitely constructed by Anna's mom).

The first thing that strikes you when you step off the plane into the pleasantly balmy humidity (besides the availability of the book, A President from Hawaii in every corner market), is the dichotomy of the landscape, with low-lying roads and forests rubbing shoulders with incredibly high volcano crater walls. The island of Kauai doesn't even have the highest peaks of Hawaii (maxing out around 4000 feet above sea level) but for a guy from the perpetually flat Virginia area (where the Blue Ridge Mountains aren't allowed to be taller than the Washington Monument), they get the job done.

The weather going into winter is perpetually between 70 and 85 degrees, and sporadic rain showers last between 1 and 6 minutes. In the wintertime (which includes October), there's occasionally a longer rain, but it's so localized that you can usually travel a few miles down the road for sunny skies. 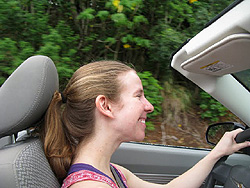 As you drive down Kuhio Highway, the first things you notice are the parties of wild chickens living in the bushes. The second thing you notice is the obscene number of PT Cruisers coasting down the roads -- my guess is that after they failed to become the "IT" car on the mainland, some salesman came up with the bright idea to ship the remaining 500,000 cars to an island populace who didn't realize that they weren't as cool as advertised (Hawaii is also a HORRIBLE place to play the License Plate game). It's unknown whether there are more PT Cruisers than wild chickens.

For the second leg of our trip, away from the Resort, we rented a convertible for novelty's sake, so we didn't get to experience the PT phenomenon firsthand. However, we did drive through at least two parking lots where a Bingo card's worth of Cruisers sat in adjacent spots, like the poorly rendered background of a Dreamworks animated movie, where the artists got lazy with the Clone Stamp tool. 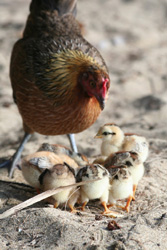 Driving in Kauai is generally on one or two-laned roads with a top speed of 50 miles per hour. Though this seems ridiculously limiting, everyone drive in a relaxed way, often stopping to let chickens cross the road (to get to the other side!) or to allow someone else to turn left across rush hour traffic. Congestion is heavy, but there's never a full-on traffic jam. The people are just generally more laid back, and the locals are just as friendly as advertised, their accents a strange mix of surfer and Minnesotan.

We spent the first four days of our honeymoon at the Sheraton Resort, pampered and pandered to until the rhythm of work and weddings wore away. Once we had lost track of what day it was, we snatched up our convertible (choosing the less distinctive Sebring over the fire engine red Mustang) and started touring the island. Our days were a perfect mix of beaches, hikes, delicious food, and sometimes just long hours by the pool.

To Be Continued Someday...

Sicilian prefers prison to house arrest with his wife

Kids as young as nine to get career advice