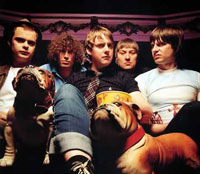 I've only heard two songs by the UK group, Kaiser Chiefs but they both suffer from the same disappointing lost potential. The group has a great sound and writes good intriguing verses, but they really suck at choruses, which are so repetitive that they make listening to the whole songs a chore.

Here is Exhibit A of catchy verse, from Oh My God:

And here is Exhibit B: the self-defeating repetitive chorus which makes the song annoying:

Simple choruses are great for singalongs, but surely someone could have come up with ABAB or ABAC rather than AAAA.

The second song of theirs I heard was I Predict A Riot which is a little more palatable:

And the dumb chorus, which at least has some semblance of consequent phrase:

Both songs also employ the jumbly-pitch rising effect, a la Day In the Life:

It is fun to shoot people.

Colleagues became suspicious after he bought a new car using banknotes from the robbery.