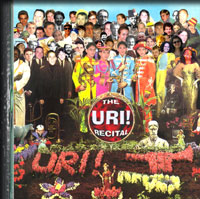 It's been two full years since my crazy final undergraduate recital. If I had it all to do over, I would have dropped the brass quintet piece, added another brass ensemble piece or a vocal piece, and sped up the Arutunian. I'd also print about fifty fewer of those novel-sized programs.

I'm looking forward to getting a new TV in Virginia and playing video games. Over the past few months, the image on my current TV has slowly bled off the top of the screen so every actor looks like a midget with a giant forehead (the bottom half is still properly proportioned). Since almost every video game puts pertinent information like health and time at the top of the screen, it's like I'm playing the games in an iron man competition, blind to all stats. After dying unexpectedly several times in Zelda a few weeks ago, I put the video games on temporary hiatus. I guess I can add "finish all the unfinished video games" to my list of future plans, although it doesn't sound nearly humanitarian or noble enough.

Booty has a rotating list of favourite games she likes to play. In honour of National Girl Scout Leader Day and the forthcoming Booty cookie (sign the petition if it reaches you!) I've decided to summarize the games here:

My future plans (V of V):
I'd like to learn how to do more with Photoshop, since I currently know the bare minimums required to fake effects. I've seen some incredible artwork created with Photoshop, and it'd be nice to get my hand back into the art-biz somehow. I also plan on reading the instruction manual for my digital camera. All I've ever done with it is point n' click, and there's probably many more options that I don't know about which would make my pictures suck less.

I'd also like to read some on sociology and history from the past hundred years, but it's so much more fun to read books that I've already read before.

All these grandiose plans are of course accompanied by the usual plan to exercise more and get out of the house more. I'll probably do some sports through work like soccer and basketball and ultimate frisbee, and hopefully I'll live in an area that's conducive to jogging to McDonald's. I've even got a book on how to work out without actual equipment, though I haven't done more than skim it so far.

Finally, I want to get back into hiking and biking since northern Virginia is close enough to trails and mountains for both. I'd rather hike on a mountain and bike on a trail, but maybe I'll mix things up and hike on a bike.