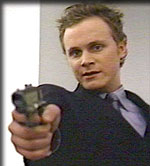 Tonight is the penultimate night of new Alias episodes for season two. Next Sunday, ABC will be showing the last two episodes of the season back to back. Watch.

This afternoon is the annual theory/comp department gala, where grad students and professors team up for three-legged drinking games and sumo wrestling. It will be followed by the annual steel drum concert where various pan players warm up the stage for the weird fruit-slicing gamelan ensemble that follows.

I have the hardest time spelling the various forms of the word "occasion". No matter how many times I look it up, it always looks wrong and I end up double-checking.

My future plans (III of V):
I'd like to learn how to play the violin and guitar. Trumpet is all well and good, but as I've said before, the amount of time you don't practice directly influences the quality of tone you produce. I'd like to play an instrument that you can drop for a few weeks and only lose facility rather than basic tone production. Plus, it's hard to practice trumpet in an apartment.

I'd like to pick up violin simply because I've never played a string instrument before. It would be useful to have some basic ability so that I have more confidence in the next string quartet I compose for a nonexistant competition. As for guitar, it'd just be nice to be able to play a rhythm instrument. No doubt I would become the life of the party.

He denied band members' accusation that it was underhanded of him to lock their instrument closet, saying the athletic department needed to impose "inventory control" during the transition.

New Booty pictures on the Photos page. This week, Booty fights a clone of herself.