The above excerpt was the April Fools' dictation example for yesterday's classes. My first class caught wind of the joke before I could get very far, but my second class panicked, especially since they had only learned compound meter some ten minutes beforehand.

The Verne Troyer guest appearance on Monday's Boston Public was easily the most gratuitous guest spot in the history of guest spots. Verne Troyer played Mini-Me in the Austin Powers movies, and his role here involved being a miniature genius who helped students cheat on their tests by hiding in a locker.

"It sounds like some rats from my former network, NBC, are trying to stab me in the back."

Rivera said he had heard nothing about being expelled until he called network headquarters for a scheduled live report.

"MSNBC is so pathetic a cable news network that they have to do anything they can to attract attention," Rivera said. "You can rest assured that whatever they're saying is a pack of lies."

A U.S. Central Command official said, "He is being pulled. He just doesn't know it yet. He has not gotten the word." 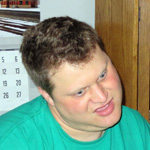