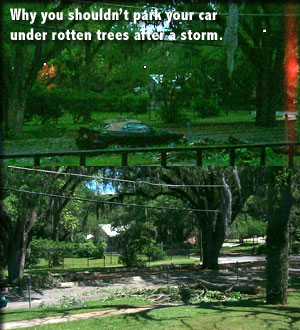 It doesn't look so bad in the picture, but a tree fell on a car outside my building last night. I think the Spanish Moss is fighting back.

We had a TA grading party last night at a professor's house. The purpose was to grade the Sight Singing / Eartraining II final exams and the party came complete with food and vocal renditions of the latest pop hits by a four-year-old. Grading dictation would be much easier if it were multiple choice on Scantrons:

My future plans (II of V):
I have a few programming side projects still on my list. It's anyone's guess as to when they'll finally be completed, but I'm definitely going to try.

Still in limbo since last summer is my Pattern Recognition package, that would search for melodic and harmonic patterns in melodies (which could be used to find motives or partwriting errors). I completed the groundwork for it at the end of last summer but I've mostly lost interest in it since then. This one's not high on my list.

I also need to release an updated version of my game, Augmented Fourth, which was originally released April 1, 2000. There's a few bugs, red herring, and annoyances that I could take out, but none of them were ever showstopping enough to warrant a full update. I meant to release it within six months of the original version, but since then I've forgotten most of the language that it was written in. It will still come out one of these days. Also, the original version will remain on the page as an applet on the Games page, for anyone who never beat it.

One project that I do still have interest in is an aural skills package to improve upon the currently available ones. I'd like to combine the best aspects of various packages like MacGamut and Practica Musica into an intuitive and useable package for undergraduates. I'm sure I could even make a few bucks off of this project if I brought it to fruition, especially if I named it Not Practica Musica. This is a major undertaking, and would probably take a couple years, but hey, it's not like I have homework anymore.

I also plan on learning some synonyms for the word "package".

Once I'm independently wealthy and can retire to my private tropical island paradise, I might even make a version of Finale that works in a logical and consistent manner. Alternately, I'll go on the circuit hiring myself out as a usability consultant -- earning massive amounts of money by telling people what doesn't work.

By the way, I occasionally post stories from the New York Times. I don't have a login myself since I use a username that someone posted on a website long ago. If you want to read NY Times articles use username: cosmoran password: spider for all your reading needs.