When you order multiple items from amazon.com, you have the option to ship each item as soon as available (at extra expense), or to wait until everyone is ready and send it all in one package. You'd think that the extra cost would be justified because your stuff arrives sooner, but in reality, amazon.com will ship items out as soon as they're available, regardless of whether you ask them to do so. I've always wondered how many people actually pay the additional charge.

Since I got home, I've been playing Return to Castle Wolftenstein, the latest first-person shooter from id software. It's a remake of the classic Wolf 3D from the days before Doom and Quake, and it's really good so far. The graphics are on par with other recent hits like Max Payne and I'm not hindered by a computer that's too far behind the current technological envelope. Speaking of games, I never did finish Planescape: Torment which I started back in September. It was an intriguing story, but eventually I just lost interest in caring about how it turned out. I left my N64 at school, but when there, I was playing the second Zelda game, Majora's Mask. I really didn't get enough time to get into it between all the schooling of last semester, but it seemed like a good game. Like all Nintendo games, the fun and interesting parts barely outweigh the design issues that just piss you off, but to a much lesser extent than its prequel. 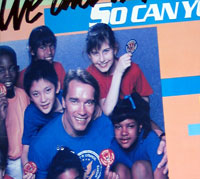 This is a picture of me on the Governor, from a physical fitness poster in the late 80s. I could have sworn that it was already on this site, but I guess I overlooked it.

It looks like some high school English teacher has assigned students to analyze the poem, Storm Warnings by Adrienne Rich, and they're plagiarizing with the best of them. As a site owner in the new millenium, I suppose I have some ethical impetus to removing my old work. Of course, it's more fun to see voracious kids accept my crappy essays as gospel and not tell them which ones got less than stellar grades when they were fresh.

When you burn down a boathouse, make sure the President's boat isn't in it 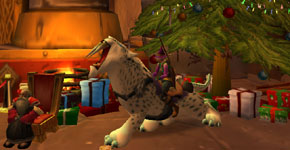 When your guinea pig is cold or has low self-esteem


This short piece is an extended version of the Museday fragment written on March 4, 2008. 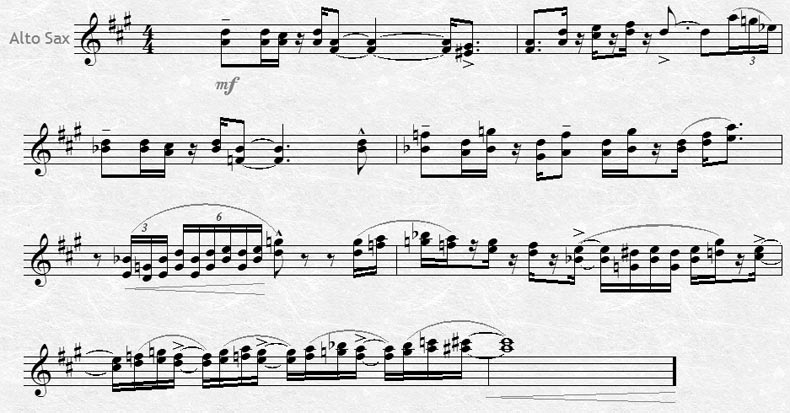 The piece is written for saxophones, violas, and trombones (also known as "the neglected instruments"), as well as various percussion instruments and drum machine effects). I wrote it over the course of two weeks, generally spending about an hour a day on it.

The original fragment can be heard here. Merry Christmas!

Michigan bans being annoying in public

How would you rate Afire?

For the final segment of Cool Places I Visited While You Spent the Month of October Working, I'll be talking about hikes. I'm always been a fan of hiking (of the "go up a mountain with a water bottle and then go home and eat dinner" variety, and not the "BOIL YOUR WATER AND CHECK FOR SCORPIONS IN YOUR UNDERPANTS variety, or even the "Dulles Toll Road Fare" variety), and Kauai is eminently hikable with surprisingly diverse scenery for an island only 18 miles across.

Kuilau Ridge: After our 2008 trip to Europe, on which I was forced to hobble around London like a hunchback, we played it safe with our first hike. We traveled inland from our condo to the Kuilau Ridge Trail, a constantly elevating but easy three-mile hike into the jungle. Thankful for bug spray and munching on cheap sandwiches made from cheaper Safeway bread, we made it to the summit to find the view completely blocked by clouds. These clouds pursued us back down the mountain in the form of a monsoon, completely soaking us through our protective rain gear and vividly illustrating the reason behind every guidebook's admonition to "bring old shoes". 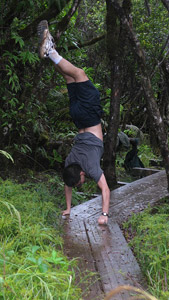 Pihea Trail: Our second hike started with a fifty minute drive up the side of Waimea Canyon, until we were 4000 feet above sea level and accompanied by no one but chickens. The terrain of this hike was a series of mud and lava-rock scrambles like the picture on the right, and looked fake enough to resemble some Hawaiian's take on some sort of Adventure World theme park. After peaking at another foggy summit, the trail descended into the Alaka'i Swamp, a chilly, squishy locale despite the presence of wooden boardwalks over every OTHER mudhole. It started to rain towards the midpoint, so we ended up hiking just four miles before returning to the lower elevations and sunny beaches. 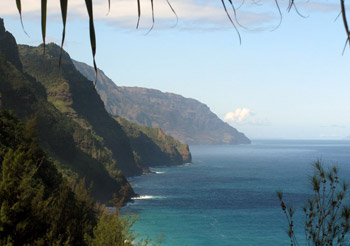 Kalalau Trail: This trail is eleven miles long, and actually requires a permit since it involves camping, but we took the day-tripper approach of hiking four miles in and four miles back out (just in time to devour prime rib at the Hukilau Lounge that night). The weather was much warmer on this coast, but since the trail followed the serpentine coast, each plunge into the humid jungle was rewarded with a coastal lookout point complete with free sea breezes.

The second half of the hike was characterized by giant bamboo stands, fallen guavas that exploded satisfyingly when you landed on them, and very poorly-marked trails over stream crossings. We bonded in solidarity with two other couples traveling in the same direction -- coincidentally, one couple, Mark and Natalie, were from my hometown of Alexandria and had gotten married the weekend after us. (In another "small world" happenstance, the pair we took our helicopter tour with had gone to UVa). 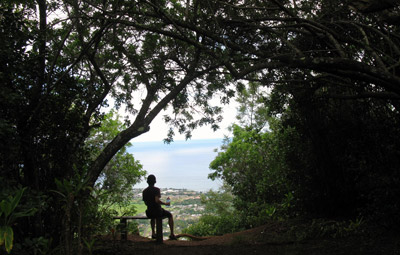 Nounou Mountain Trail: By this point, we were hiking pros and tackled this short three-mile hike with ease. I tried hiking both in sandals and barefoot (which was much more comfortable and less prickly than I would have expected). At the top, after a few near-deaths on the narrow spine of the mountain summit, we got a panoramic view of the island and climbed into what must have been The Sleeping Giant's nostril.

The thing I really liked about hiking in Kauai was the lack of hazards other than mosquitoes. You never had to worry about stumbling into a spider web or brushing past a stand of poison ivy, and this made it easy to plunge blindly into the jungle the way we did on our last hike to the Secret Lava Pools. The hike itself was brief, less than half a mile, but it crossed a small stream where the clouds of mosquitoes were so thick, they looked like gnat swarms. The pools themselves were worth this adventure, but the presence of several other hikers at the location made us realize that there was a path with a much lower wilderness quotient. It involved walking along a beach and hopping on a rock or two, then climbing a ladder bolted into the side of the cliff face.

All in all, we probably hiked and walked over 24 miles of trails and beaches in Kauai, and on the final day, I tossed my sneakers into the trash. I hate mildew.

The blizzard seen from space

Toy Story 3:
I always preferred the Toy Story franchise to the Shrek franchise, and number 3 doesn't disappoint. It hits all the right notes, blending the humourous with the touching, even if the giant zombie baby doll is too creepy for redemption. The only problem was with our local Blockbuster (if five miles away can still be called local) who decided to rent a disc containing none of the special features. Netflix Instant is probably soon to be in our future.

Iron Man 2:
This movie was pretty forgettable, in spite of the incredible make-up job that makes Terrence Howard look like Don Cheadle. The one-liners and Downey Jr. magic are still there, but once the movie devolves into a bunch of robots fighting each other and the actors themselves are replaced by special effects, it gets pretty tedious. I greatly preferred the first movie.

Dragon Quest XI:
I always expect that I'll like JRPGs more than I actually do, and to be honest, this one is pretty good for what it is -- catchy music, good translations, and a fun feel. Its downfall comes in the form of unchangeable text speed, something that should be a given in ANY video game in 2010. Although the base default is pretty zippy, there's still too much time spent waiting since Dragon Quest, by its nature, is a very grindy game with lots of battles and merchandising. The menu system is old-school, so selling a piece of thread takes you through menus for "Buy / Sell?", "Which Character?", "Which Item?", "I can pay X, is this good?", "Would you like to sell again?". This is more tedious than watching robots fight.

Just a Geek by Wil Wheaton:
Back when Rachel was a regular reader, she'd occasionally plug the blog of Wil Wheaton, former child actor in Stand By Me and Star Trek: The Next Generation. This book is a collection of blog posts over the last ten years coupled with a retrospective memoir of his transformation from "former child actor" to general mayhem maker. Although I don't care a whit for anything related to Star Trek, I found this book to be an enjoyable read, and easy to relate to, enough so that I now link to his blog from the Bloglog so I can read it live and uncut. The only negative comment I have relates to the Kindle edition rather than the content itself: the Kindle version makes no delineation between where a blog post ends and his "post-thought commentary" begins, not even a line break, so I spent a few sentences of each chapter confused as to what exactly I was reading. 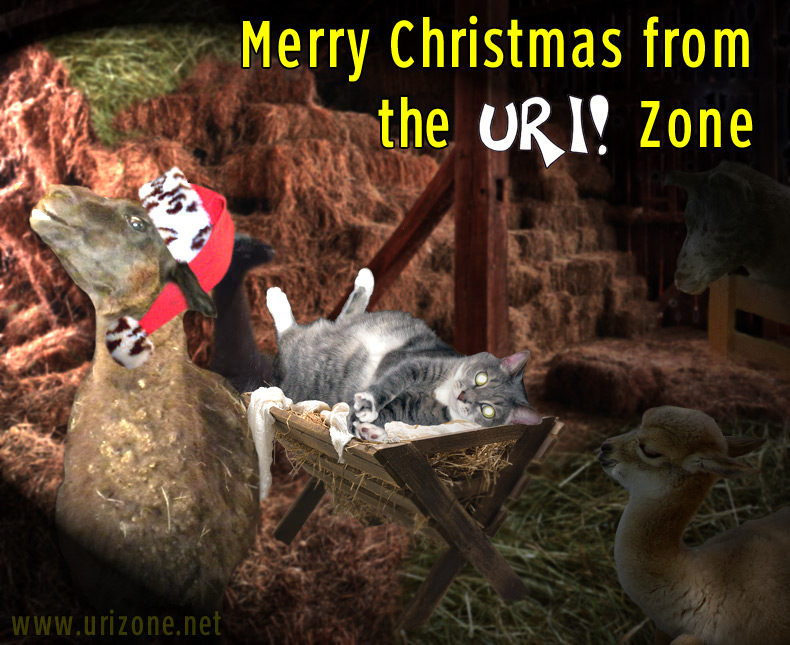 I wrote Badinage in the Fall of 1999, inadvertently making it the last piece in my repertoire to be considered "Contemporary 20th Century" music. It was originally performed by Allen Bachelder and Jim Bryant on my 5th Year Recital, and then again by me and Rob Kelley down at Florida State.

With the looming Christmas holiday and my recent interest in trumpet endurance practice sessions (currently up to 12 minutes per day), I thought it'd be fun to do an amateur recording session of this piece. I'm no Kelley Corbett but I still remember which buttons to press.

I recorded this over two days in my home studio (the office with the door closed), using the Roland SC-8850 for the accompaniment and Adobe Audition for the mixing. Enjoy!

From the liner notes: Badinage is an abstract work that started out as a series of major seventh chords. My last trumpet and piano work was deeply emotional and almost programmatic in nature, so this was my attempt at a song on the opposite end of the spectrum. I started writing it as a possible first movement to a Sonata, but eventually realized that it worked much better as a tightly cohesive single movement work. The word "badinage" is French and describes a playful banter. In this instance, both the trumpet and piano share the spotlight with equal importance. 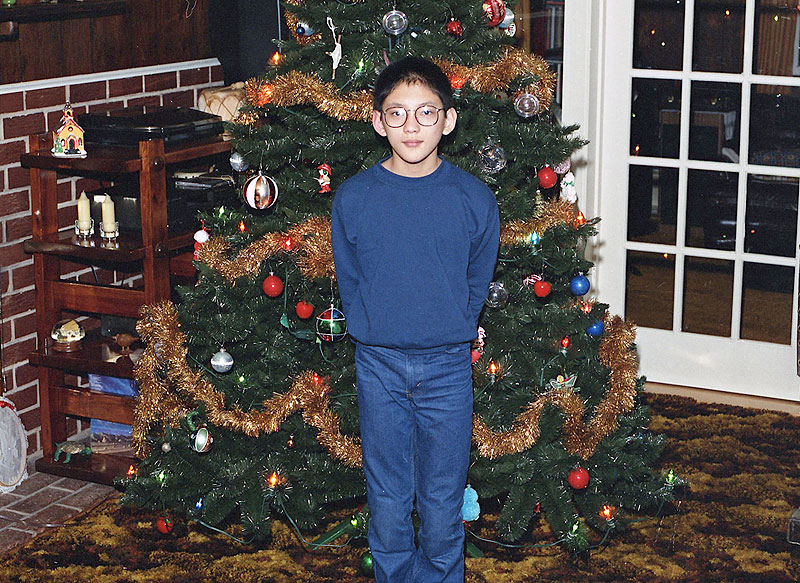 This picture was taken at Christmas time in 1992. I was a freshman in junior high school and still getting used to my GIANT glasses. Not pictured is the creepy animatronic angel on top of the tree that would have been perfectly at home in one of those "every day is Christmas" homes.

A smattering of events from 2019

How was the last year of this decade for you?

A smattering of events from 2020 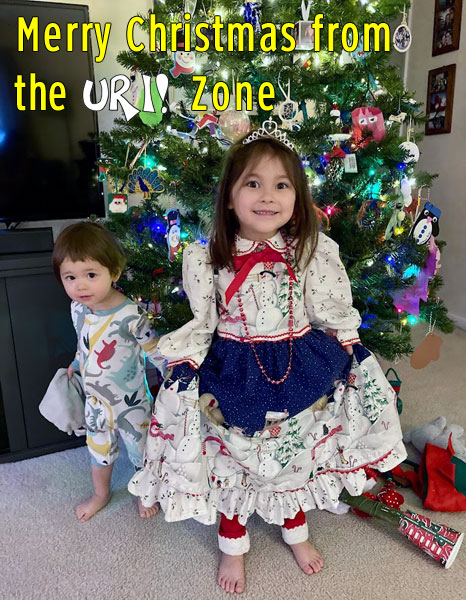