One thing I dislike about the business world is the predominance of the backwards email thread -- where older responses appear at the bottom and each new reply is stuck at the top. This style works in news posts, such as this page, but that's because each entry generally does not depend on understanding of previous entries. I guess people are too lazy to reconfigure their Outlook preferences or just scroll down to the bottom for the latest info.

There's a family of geese living at our building. Yesterday I saw the mother goose teaching one of the babies how to poop on the lawn.

Next study shows that a lot of Southerners eat lobsters

Bomb scare was no game to police

Nothing to do in Indiana 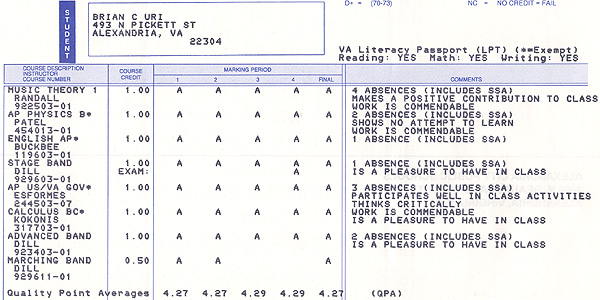 Going to public school is like going to traffic school -- you show up, tune out, put in the time, and walk away with a certificate. My senior year of high school was easily one of the most enjoyable school years, because other than the three AP exams I took mid-year, it was an exercise in daily mingling.

First Period: Music theory was a class of three musicians and three non-musicians, so the classes were geared towards the latter. We learned basic chord progressions without having to do any partwriting and got to listen to the 8-bar melodies of the non-musician who insisted that he was in a punk band.

Second Period: Dr. Patel's idea of a joke was to put "shows no attempt to learn" on my report card. We did all sorts of tactile physics experiments while listening to him refer to us as chipmunks, bestow wise Indian maxims, or dismissing other subjects as garbage. After the AP exam, we watched the entire Star Wars trilogy, during which Dr. Patel insisted that Yoda had stolen "There is no try, only do" from him.

Third Period: We watched movies, read plays, told the teacher than anyone who was absent was probably "out back smoking crack with Zulfan", and convinced a substitute teacher that we were planning a surprise party for our teacher so we could send someone off-campus to buy sodas.

Fourth Period: Jazz band was only offered during lunch so we'd play the latest offering from Kendor Jazz for thirty minutes (until people started complaining that they were hungry), then eat a quick lunch at the end (two bologna and mayo sandwiches with an apple, a fudge brownie, and a juice pack). 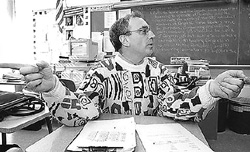 Fifth Period: Mr. Esformes did not believe in AP courses

so he mixed AP students and average students together in a giant social experiment that worked about 75% of the time. Classes were both insightful and inciteful, with the bonus learning counterbalanced by the time wasted on tardy slips, bathroom requests, and behaviour management.

may have been the oldest teacher in Alexandria, and he was still going strong (but with an oxygen tank) as recently as six years ago. He wasn't too strong on classroom management, and even worse with names, so you could tune out in his class and Jim would get in trouble instead. He was obsessed with his TI-85 calculator, and though both he and I owned the brand new TI-92, he never realized that it automatically solved the integrals and derivatives that were on our tests.

Seventh Period: We sat in the back and ogled clarinetists while the band director berated the constantly misbehaving marimba player.

Eighth Period: Because it wasn't an honors credit course, Marching Band was only good for lowering my GPA just enough so I wouldn't have to give any speeches at graduation.

Four Things Which Have Improved Over Time

Four Things Which Have Gotten Worse Over Time

Four Things Which Have Remained the Same

Voyage to the centre of the Plastic Vortex

He notes that in all his years of teaching, every man's dog has remained downward.

I've added new photos to the Life, 2010 album, and only 6 of them include Booty!

Executives out of ideas, want to reboot Alias 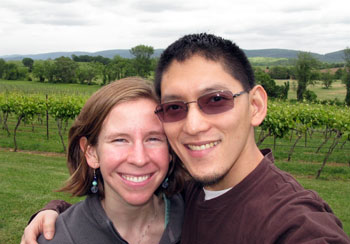 Memorial Day Weekend has never been a major vacation weekend for me, but we decided to buck inertia on Friday afternoon to get out of town on an impromptu personal junket. As the maxim goes, when you put the "u" in "spontaneity", you'll live longer and have the chance to put all of the vowels in the same word.

After an hour crawling down Route 7 towards Leesburg, we zoomed into the countryside and stopped at the Veramar Vineyard in Berryville. We had decent reds and forgettable whites, as well as a coupon for a reduced fee tasting at the sister winery down the road. We then made it to Winchester for our stay at the Old Waterstreet Inn.

We had dinner at Brewbaker's on the "ped mall", which seems like an unfortunate abbreviation although everyone uses it, and then late-night ice cream at the Baskin Robbins that was in spitting distance from the bed and breakfast.

On Saturday, we tried hiking at Raven Rocks, but again ran into a full parking lot. Instead, we decided to go to the Bull Run access point on Route 28, and did a 7 mile hike towards Hemlock Overlook and back. Cicadas abounded down south, although we still have none in Sterling. On Saturday evening, we met up with Jack and Kristy in Arlington for steaks, and their two-year-old son, Johnny, decided that I was Barack Obama.

Sunday and Monday were recovery days, which we spent at home grilling salmon and watching Dexter. On Monday night, Rebecca went into DC to meet up with friends, while I stayed home to code and eat 16 wings from Joe's Pizzaria.

How was your holiday?

I'm busy this week writing open-source software. Enjoy this video from May, 31, 2005, when kitten-Amber lived with three other cats, but still couldn't find anyone to play with.

Boyhood (R):
Built around the conceit of filming the same actors over a span of 12 years, this movie ends up being more of a series of moments than a strong narrative. The dialogue of the children bounces erratically between realistic-sounding and outtakes from Degrassi Junior High, but in general, this is a pleasant journey with minimal resolution.

Game of Thrones, Season Four:
The writers of this show must have heeded my advice to calm the eff down, as they don't try to cram every single story into every single episode in this season. Episodes focus on a few characters at a time, allowing the plot to breathe a little more. There's still plenty of storylines that we don't care about -- anything involving Red Vagina on the Island of Who Cares, or Hodor's inability to give Bran a haircut -- but this season was a definite improvement over the second and third.

The Shield, Season Five:
This is a tightly-wound season that starts weaving together the varied plots of previous seasons. It's elevated by the performance of Forest Whitaker as the erratic, crazy-eyed IAD detective, and kept me binging through the season finale.

The Shield, Season Six:
A slight letdown after the fifth season, this one had the handicap of also being the penultimate season, meaning that too much time was spent setting things up. This reduced the cohesiveness of the story within the season, although it did a nice job of foreshadowing what's to come.

I reached level 1201 in Overwatch last week, which got me a useless gold portrait border and a good point at which to stop playing the game so obsessively for a while. Overwatch has always been fun (and it's the only game I ever played contiguously for over 2 years) but like Hearthstone before it, it got to a point where I was mostly playing it because it was familiar, fit into the baby-nap-sized holes in my schedule, and I didn't have to think too hard about it. Recently, queue times are getting longer, the community is getting grumpier, and I'm not improving nearly as much as I want to. I'll still play a game now and again, but it will no longer be the default thing to do whenever free time exists.

To mark this occasion, here are the last few Junkrat Play of the Game videos I had sitting on my hard drive which prove that Junkrat is clearly the best character in the game.

Next up to fill the Overwatch-shaped gap in my life: dive further into Divinity: Original Sin 2 (a game with actual progression and a storyline) and reacquire all of my AWS certifications that expired while I was working for that startup last year! 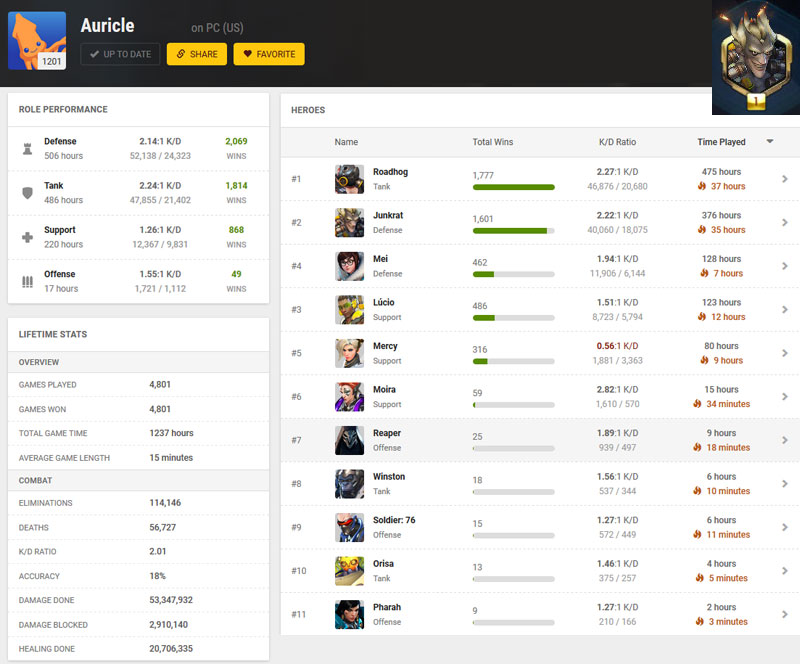 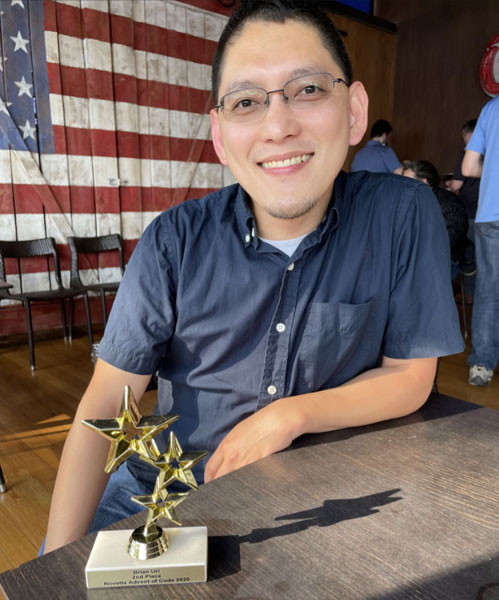 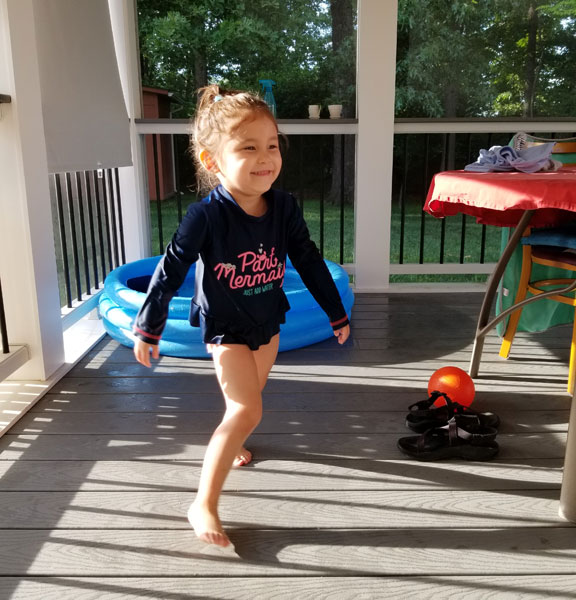 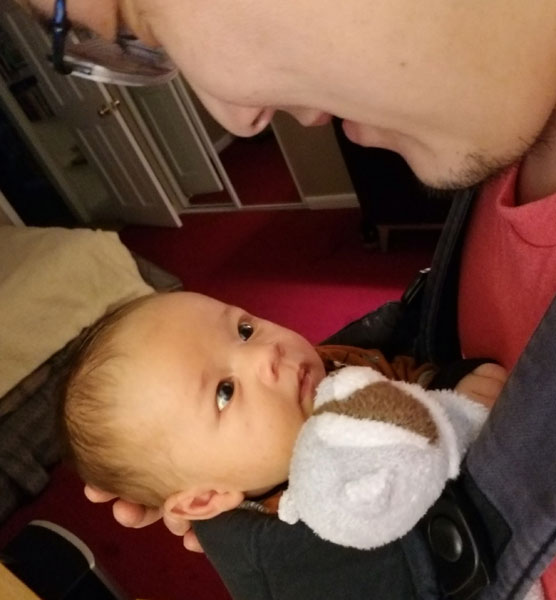